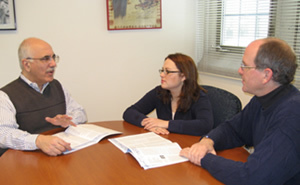 Scholars in the field of comparative politics have long consulted the American Political Science Association’s official journal of its Organized Section in Comparative Politics, APSA-CP, for articles regarding methodology, theory, and breakthroughs in the field.

In 2002, the American Political Science Assocation awarded Notre Dame the opportunity to publish APSA-CP for four years andrecently announced that APSA-CP will continue to be published at Notre Dame until 2010. Michael Coppedge and Anthony Messina, associate professors of political science, co-edit the journal.

Innovation and inclusion are hallmarks of their approach.

“One of my favorite issues is the first,” says Messina. “We made considerable efforts to have a lively newsletter, but with this issue, we established that we would be reaching out to historically underrepresented and more youthful voices in comparative politics.”

Already known for its concentration in Latin American politics, APSA-CP has enabled Notre Dame’s Department of Political Science to showcase other areas of strength on a nationwide scale.

“Publishing the newsletter at Notre Dame is a good way to call attention to the strength of our comparative politics faculty," says Coppedge. "One of our strongest assets is our commitment to producing a newsletter that gives balanced, pluralistic representation to the diverse methodological approaches in our subfield.”

The publication process is led by a team of editors, including Coppedge, Messina, and Kate Schuenke, a political science graduate student. Assistant Professor Naunihal Singh serves as the book review editor and an editorial board of eight faculty members helps plan each issue. All editors play a role in suggesting new ideas for the journal.

“The field has responded to our stewardship of the journal rather well,” says Messina, co-editor and director of undergraduate studies in Political Science. “I think we are viewed as open-minded, intellectually balanced, and broad ranging in our approach to comparative politics.”

That APSA-CP continues to be published at Notre Dame speaks to its quality and support from the University.

“The funding we have received from the College of Arts and Letters, the Graduate School, the Kellogg Institute, and the Nanovic Institute has been absolutely essential,” says Coppedge. “We are also helped by the staunch moral support of the Department of Political Science and the College of Arts and Letters, who all recognize the importance of this publication for raising Notre Dame’s profile in our discipline.”

The field of comparative politics and the University are not the only beneficiaries of Notre Dame’s stewardship of APSA-CP. Publishing the newsletter has given Coppedge and Messina the opportunity to stay on the cutting edge of developments in the field.

“Dataset reviews, an innovation of ours, are typically written by graduate students at Notre Dame,” says Coppedge. “I take primary responsibility for this section, which gives me a powerful incentive to stay on top of emerging quantitative research.”

Adds Messina, “I especially enjoy working and sharing ideas with my colleagues in the comparative subfield of political science at Notre Dame, elsewhere in the country, around the world, and especially with Professor Coppedge.”

This piece was contributed by Jane Marie Russell (’08), an intern in the College of Arts and Letters Office of Communications.