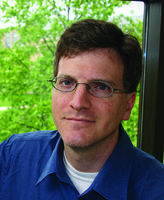 Joseph P. Kaboski brings a rare combination of skills and interests to the Notre Dame Department of Economics: the ability to move between macroeconomics and microeconomics—and experience using both areas of study to answer some of today’s most pressing questions about growth and development.

“Kaboski’s skill set was incredibly broad,” says William Evans, the Keough-Hesburgh Professor of Economics and director of research for the Ford Family Program at the Kellogg Institute for International Studies. “Given the type of economics department we have and the issues that are of interest to us and to the Church in a broader sense, Joe was a perfect fit. We’re thrilled that he’s here.”

Kaboski says he chose to come to Notre Dame over other institutions because the department had recently hired several faculty members who are active in his areas of interest.

This fall, Kaboski is teaching a course titled An Introduction to Economics and Catholic Social Thought. The class starts off reading the major documents on Catholic social thought. It then integrates economic science with Catholic social teachings to see where the two areas mesh or may be reconciled.

“One of the unique things about being at Notre Dame is getting to teach a course such as this,” Kaboski says.

He has four major publications forthcoming. A paper for Econometrica uses a structural model to evaluate a microfinance program in Thailand. When enacted, the program was the largest of its kind in the world, providing funds to every village in Thailand to start a small bank for lending.

Three papers will soon be published in the American Economic Review. One quantifies the degree to which financial intermediation and the strength of financial markets explains the disparity in wealth among nations. Another examines the growth of the service economy and whether economic fears about its growth are justified. The final paper looks at what happens to trade when poor countries devalue their currency, and how these financial crises may be linked to inventory management.

After receiving his Ph.D. in economics from University of Chicago in 2001, Kaboski joined the faculty at Ohio State University, where he was an assistant professor in the economics department and on the affiliated faculty of the John Glenn Institute for Public Service and Public Policy. He has been a visiting professor at the University of Chicago and has consulted for the World Bank, as well as the Federal Reserve Banks of Chicago, Minneapolis, and St. Louis. He is also a Faculty Research Fellow of the National Bureau of Economic Research.