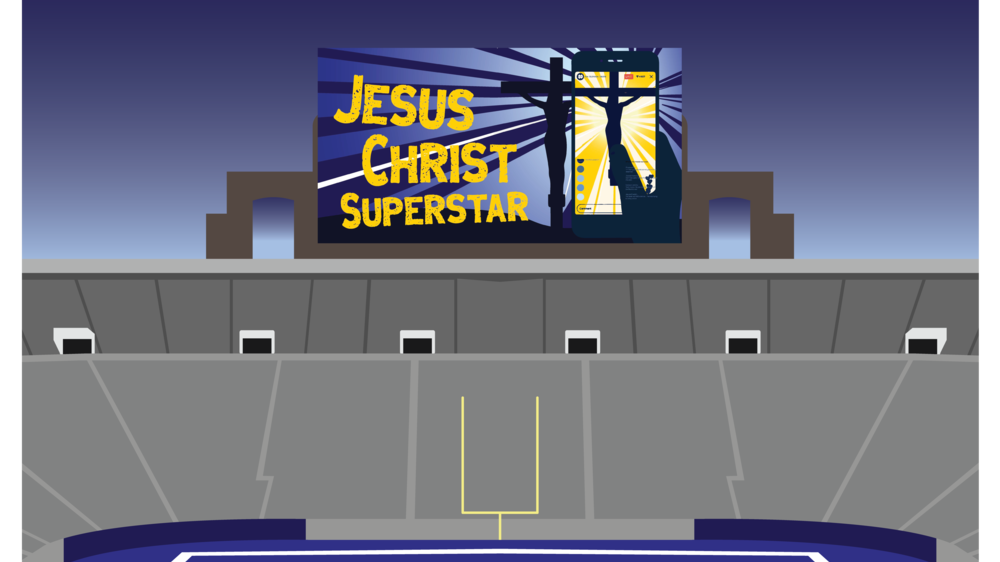 The Department of Film, Television and Theatre (FTT) will produce “Jesus Christ Superstar” on the field of Notre Dame Stadium at 8 p.m. Friday, April 9. Tickets are free and available only to students, faculty and staff with a Notre Dame, Saint Mary’s or Holy Cross ID. FTT had planned to put on the production last April, but the pandemic prevented that from happening. NDWorks recently caught up with Matt Hawkins, director of musical theater, about the production.

Did you choose this musical and why?

I chose this musical to showcase a few of our 2020 seniors and to create a dynamic conversation about religion and the story of Jesus. What if Jesus arrived on earth today, during the 21st century?

Some of the students cast for the 2020 production likely graduated. Why put on this particular musical this spring instead of choosing another?

We had already rehearsed the entire show in 2020 and we were about to move into the theater to add the technical elements right before it was all canceled. It made sense to me to honor all the hard work that everyone had already done.

Tell us about a couple of the cast members. What excites you about their abilities and performances?

Two recent alumni will play the lead roles they intended to play last spring. Teagan Earley ’20 performs the role of Judas, and not only is she vocally gifted, but I’ll also be interested to see the conversations surrounding a female-identified actor playing an iconic male role and how that impacts the story. And Jorge “Jay” Rivera-Herrans ’20 returns to campus to play the title role, and his emotional and vocal performance will be exciting to watch on this large platform. (It’s not the first time these two have performed together. Check this out.)

All of our rehearsals are either online or virtual. If they are in person, then we are in the Leighton Concert Hall, with masks on, 15 feet apart when singing, and increased fan speeds for the HVAC systems. Our performers will also be spaced out in the stadium for safety. We also cut the majority of the blocking and choreography for this performance, and we’re leaning into the music instead. So, the majority of the performance will be singers stationary at their own microphones.

Where did the idea come from to perform the musical in the stadium?

The football stadium allows a large audience to safely watch the show and for the performers to safely sing, and the video board will support the media storytelling aspect of the show.

What can audience members expect to see on the field when they get there?

How many students are taking part in the program?

Is there anything else you would like to mention?

Projections are designed by alum Ryan Belock ’12, whose recent credits include the Broadway and touring productions of “Dear Evan Hansen.” Also, there will be food trucks on Library Lawn following the performance from 9 to 11 p.m.

Originally published by NDWorks at ndworks.nd.edu on April 06, 2021.