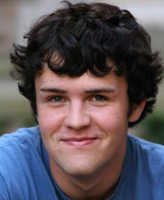 Ryan Geraghty ’12 has been named one of the top five graduating industrial design students in the nation, and his work will be featured at the Industrial Designers Society of America’s (IDSA) International conference in Boston August 15-18.

Geraghty earned this opportunity by winning first place at the IDSA’s Midwest District competition in April.

Another record for the books: Geraghty was the fifth Notre Dame student in six years to take the title.

To compete at the district level, Geraghty first had to present his work to a group professional designers that Notre Dame’s Department of Art, Art History, and Design brought in to select the “most exemplary student” from this year’s class of seniors.

“Not to say he didn’t have stiff competition for this award,” Conrado says, “but I’ve known Ryan since late in his freshman year and he’s been a stellar student all the way through the program. He has always shown a propensity for critical and deep thinking, really pushing his ideas further and further and not being afraid to fail, which I think is a great marker of a design methodology.”

After winning the merit award in the University’s College of Arts and Letters, Geraghty presented the IDSA Midwest District conference in Chicago along with the top industrial-design students from eight other regional schools. Using no more than 30 slides, each student had seven minutes in which to present his or her body of work and explain its significance to hundreds of professional designers.

Geraghty says he practiced his speech dozens of times to get it just right.

“We are becoming the Yankees, I’m afraid,” he jokes. “We’ve had some amazing designers come through our program and I feel very privileged to be among them but I did kind of feel that I had a target on my back. I rehearsed my speech until it was as good as I could have it. I didn’t want to let Notre Dame down.” 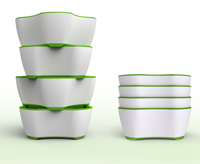 Geraghty presented three projects at the competition. The first, a new design for meal preparation bowls, won an award at the 2011 International Housewares Association Student Design Competition and has already been patented. The project was one of his toughest challenges, Geraghty says.

“I saw how quickly kitchen space gets used up and thought: Is there a way to solve that? First I looked into expanding that space, working with cutting boards and modifications on cutting boards for about two months, but that didn’t really pan out. I couldn’t get anything that got great feedback.

“So I went back and redirected my entire project…instead of expansion of space, it was consolidation of space, which seemed like it might be a terrible idea at the time,” he says. “But I ended up designing these bowls that you when you nest them they can be stored without taking up a ton of space and when you fill them and twist them 45 degrees they stack securely like a tower. It lets you concentrate all your work in one area with all the ingredients right there.” 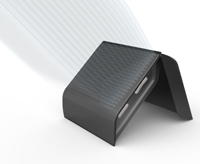 At the conference, Geraghty also presented work he did with Conrado and handicraft artisans in Nepal through the University’s International Summer Service Learning Program, as well as his senior thesis project, which was advised by Professor Paul Down. Titled HUSH, the capstone project is a portable device that combines directional speakers and sound masking, often referred to as white noise.

“It essentially concentrates the effect of the white noise on one person, instead of affecting everyone in a room, which is what current products do,” he explains. “It has the potential to increase your concentration, increase your ability to rest, decrease stress—essentially have all the benefits of a noise-cancelling headphone system except without the health risks that can be associated with frequent use of headphones.”

Pursuing industrial design wasn’t even on Geraghty’s radar when he first arrived at Notre Dame; he planned to major in aerospace engineering.

“About two months in, I was starting to dread it—I was just not enjoying any of the work,” he recalls. “I also talked to an engineering friend of mine who was older and I asked him, ‘When do you get to design planes?’ And he says, ‘Oh, you never get to do that—you design like the back wing flap of one plane for the rest of your life.’

“I applaud engineers—they work so hard,” Geraghty says, “but I didn’t want to spend my career decreasing the amount of wind resistance by .002 percent on one type of plane. I wanted to come up with a whole new way to fly.”

“I like the storytelling part of it,” Geraghty says. “I like taking a problem and going through that process and finding different potential solutions. And the industrial design faculty are amazing.”

The program’s size is also appealing, he says. “It sounds so cliché, but the other designers and I have become really close because it’s such a small program. It’s almost like you are working together in a firm.” 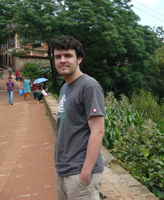 Conrado credits Notre Dame’s string of successes in the annual IDSA competition to a combination of great students and faculty, engaged alumni, and a solid grounding in the liberal arts.

“It is very refreshing to see that our approach is validated time and again by our professional practice,” she says. “Being in a liberal arts college—a college that wants to imbue our students with this broader understanding and knowledge set—it really comes across in their work.”

The department’s commitment to social design is also a key factor, she says.

“What has really, I think, differentiated our students at that national level, at that professional society level, has been the Notre Dame program’s dedication and commitment to what we call social design—design that is used to uplift and enrich the human experience, to address suffering, injustice, inequality, and humanitarian concerns of a broad nature, whether it is disability or poverty.”

That spirit, she says, has shown in the work of each of the five students who have won the IDSA Midwest District competition over the last six years—Mansour Ourasanah ’07, Ashley Ceniceros ’08, Kaitlyn Benoit ’09, John Traub ’11, and Geraghty ’12, as well as Notre Dame’s 2010 merit winner Takashi Yoshii, who placed third in that year’s IDSA competition.

“Social design is becoming trendy in a lot of places because people see it as a shortcut to significance,” Conrado says, “but our students live it, and I think that’s a real characteristic of the special community we live in here, graced by Catholic ideas and social teaching.

“The students embody the mission in a way that is significant and substantive, and it comes out in their work in spades.”