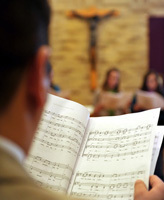 The University of Notre Dame’s inaugural Sacred Music Conference will be held Thursday through Saturday (September 13 through 15).

The conference will feature sacred music from the Renaissance to the present day and will bring together composers, scholars, and conductors of sacred music to discuss, share, and perform their work.

Several concert events are open to the public and free of charge.

A Vespers service will be held at 8 p.m. Thursday (September 13) in the Basilica of the Sacred Heart. Basilica rector Rev. Peter Rocca, C.S.C., will preside at the service for which sacred music will be provided by the South Bend Chamber Singers, conducted by Nancy Menk, and accompanied by organist David Eicher. The music will include composer James MacMillan’s “Magnificat.”

A Sacred Chamber Recital, with Notre Dame music faculty organists Craig Cramer and Paul Walker and baritone Stephen Lancaster, will be held at 4 p.m. Friday (September 14) in the Reyes Organ and Choral Hall of the DeBartolo Performing Arts Center.

Pomerium, the a cappella ensemble directed by Alexander Blachly, will perform Renaissance music on the feast of the Seven Sorrows of the Blessed Virgin Mary Friday (September 14) beginning with a pre-concert talk by musical scholar Emily Snow at 7 p.m. in the Leighton Concert Hall of the performing arts center.

Like the Vespers service, the recital and concerts are free, but tickets are required and may be obtained by calling the performing arts center ticket office at 574-631-2800.