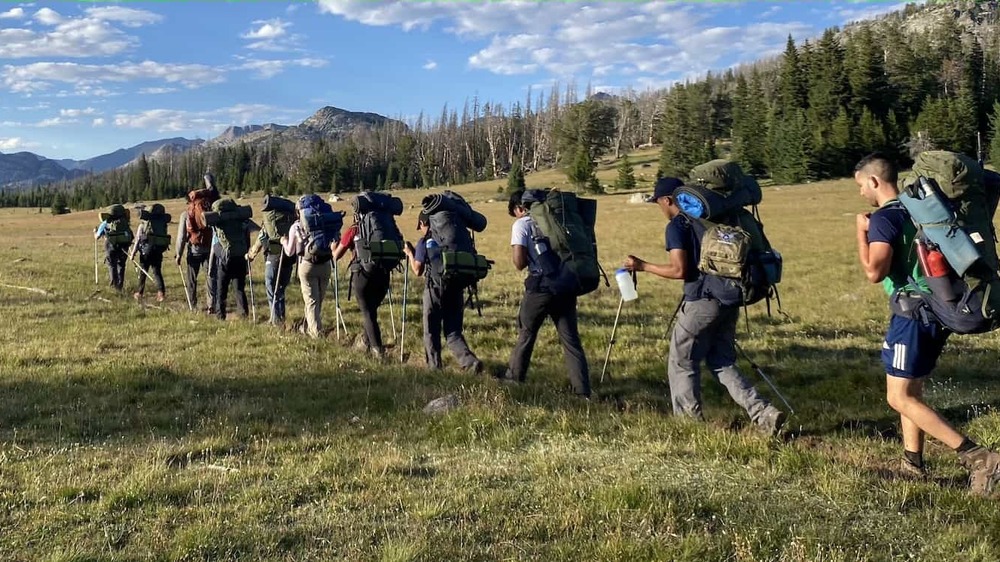 The Wind River Range of the Rocky Mountains crisscrosses western Wyoming, reaching more than 13,000 feet at its peak. It includes two national parks and three wilderness areas spanning 2.25 million acres. Visitors from all over the world flock to the range’s Continental Divide scenic trail, a route that extends from Mexico to Canada.

It was a team-building exercise for this newest group of Latino Studies merit scholars, also known as LSSP 6.

Led by tour guide Karl Eby and organizer Ilaria Schnyder, a former assistant professor at the Kellogg Institute for International Studies, as well as chaperone and graduate student Oliver Ortega, the group embarked on what – for almost every student – was their first time camping.

Amid beautiful landscapes of mountain lakes, alpine meadows and glaciers, the merit scholars cooked meals with portable fuel and set up their sleeping tents in the wilderness.

They hiked between 3 and 6 miles each day, carrying large backpacks with about 40 pounds of clothes, toiletries, cooking utensils, and food supplies. At night, the group gathered around a campfire and reflected on the day’s activities and their connection to their faith and the natural world.

Students shared their fears, joys, and ambitions as they looked forward to their first year in college.

“I often think that if I could get through the hardest hike of my life, I can do anything college throws my way,” said Grecia Alcantar, a political science major from East Chicago, Indiana. “This experience pushed me in the physical, spiritual, and emotional aspects.”

Another student emphasized the importance of the “bonding time I had with the rest of my cohort, and the many times for reflection that helped me feel closer to God.”

The Wyoming trip lasted eight days. Before going to the mountains, the group stayed two nights at a park in Lander, Wyoming, a city of about 7,500 people.

Lander is home to COR (Catholic Outdoor Renewal) expeditions, an outreach program of Wyoming Catholic College. ILS contracted with the WONDER program, led by Schnyder, who, in turn, collaborated with Eby of COR expeditions to make the outing a reality.

The first night in Lander, the group shared the campsite with a group of Notre Dame upperclassmen wrapping up their own trip as part of a theology course.

Days two and three featured visits to Sinks Canyon State Park. There, students canoed one day and rock climbed the next. Located at the southern base of the southern Wind River Range, Sinks Canyon is so named for a river that vanishes underground near its opening.

After that, it was off to backpack in the mountains. Every night, an electrified fence was put up around the food to protect it from potential bear incursions. Eby and Schnyder kept a type of mace outside their tent in case of visits from these furry mammals occasionally spotted in the forest.

Spotty cell phone reception meant the group read paper maps to navigate the terrain, a rarity in the age of Google and GPS. When the trek got boring, or someone was struggling to keep up, students played word games to keep up their spirits.

The trip was particularly trying in the beginning, though the challenge brought students together in a variety of ways.

Alcantar recalls one morning when Ilaria was taking video to put on WONDER’s Instagram page. She asked one of the guys what he was doing, and instead of answering “making pancakes” like everyone expected, he listed his majors at Notre Dame, causing the whole group to burst out laughing.

“For a moment, we all shared the sleep deprivation and the coldness of the air. It was a moment we reflected on for the rest of the trip,” Alcantar said.

Connor Kaufmann grew up amid the desert lands of El Paso. The history major “had never seen so much green before” as he did in Wyoming. At Notre Dame, he appreciates the local flora and fauna around campus, including on walks around the St. Mary and St. Joseph lakes.

“I’m genuinely happy I did go, because I took it for what it was and I ended up appreciating it more than what I thought I would appreciate it," he said. "[It was] pleasantly unexpected.”

Throughout the trip, the group received instructions on how to leave the woods undisturbed. That meant leaving no trash, and keeping off the grass to the side of the trail so as not create additional paths.

Gisela Villavicencio, of San Jose, California, said the backpacking portion of the trip caused her to reflect on people’s use of resources. Each student had to carefully manage their food supply and take with them only what was essential.

“We have the tendency to want more than what we have. The experience made me think creatively about the ways we used our stuff,” said Villavicencio, a Spanish major.

An impetus for the expedition was to have students to disconnect from the internet and hold meaningful person-to-person communication. As ILS associate director Paloma Garcia-Lopez put it, “The trip allowed students to take off the various ‘masks’ they may wear.”

When the cohort came to campus for a welcome-back event, it was clear the trip, however difficult for some, had brought the group together.

“ILS colleagues noted how close the students are to each other, in contrast to what we saw in previous groups,” Garcia-Lopez said. “LSSP 6 had become a new family.”

This happened, she said, because summer enrichment programs like WONDER help students “unveil their authentic selves” and act as a “support system” for each other.

The adventure didn’t end when the camping portion of the excursion was over. The group was all smiles when Schnyder invited everyone to an ice cream parlor in downtown Lander.

On the way back to Denver's airport, along U.S. 287, the group spotted herds of pronghorns in the nearby prairies. Pronghorns, which are often mistaken for antelope, are the fastest land animals in the western hemisphere, clocking top speeds of almost 60 miles an hour.

The drive back also served as time to reflect on the hardships and triumphs of the weeklong expedition.

“Overall, it was the bonding experiences between my fellow scholars that I most appreciated,” said Johana Jimenez, a pre-health major from Minneapolis. “We initially came in as strangers but then built friendships as things got harder.”

Launched in 2016, ILS’s merit-based scholarship and academic program — the first and only of its kind in the country — strives to prepare transformative leaders who have the passion and leadership potential to expand the common good. The Latino Studies Scholars Program, or LSSP, as it’s known, has grown rapidly, with 29 merit scholars on campus this year. ILS aims to offer 16 new scholarships per year by 2024.

Originally published by Oliver Ortega at latinostudies.nd.edu on December 14, 2022.