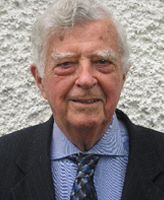 A native of Ballybofey, Donegal, Father McMullin was an internationally prominent scholar in the philosophy of science.

He studied physics at the National University of Ireland under the Nobel laureate Erwin Schroedinger and theology at Maynooth College before being ordained a priest in 1949. McMullin received his doctorate in philosophy from the University of Louvain in 1954 and joined the Notre Dame faculty the same year. For the next half century he explained that decision by praising the then-new president who had recruited him. “Father Ted Hesburgh could charm a bird out of a tree,” he would say.

At Notre Dame, McMullin chaired the philosophy department from 1965 to 1972 and served as director of the History and Philosophy of Science program and of the John J. Reilly Center for Science, Technology, and Values before retiring in 1994, continuing to teach on the graduate level until 2003. For the last seven years, he had lived both in St. Paul, Minn., and Donegal.

“Ernan McMullin was a good priest, a good philosopher and a good friend to generations of Notre Dame students and teachers,” says David Solomon, director of Notre Dame’s Center for Ethics and Culture. “One of the giants of Notre Dame, his thought and personality transformed and dominated the philosophy department for almost half a century. With Ernan’s death following so quickly on the death a year ago of Ralph McInerny and the recent retirement of Alasdair MacIntyre, the philosophy department will lose a certain Gaelic flavor. We will much miss the brilliant conversation, the personal charm and the profound philosophical insights of these three towering figures.”

McMullin wrote and lectured widely on subjects ranging from the relationship between cosmology and theology, to the role of values in understanding science, to the impact of Darwinism on Western religious thought. He also was an unrivaled expert on the life of Galileo.

The author of some 200 articles in scholarly and popular journals, McMullin also published 14 books including The Concept of Matter, Galileo: Man of Science, Newton on Matter and Activity, The Inference That Makes Science, and The Church and Galileo.

McMullin’s formidable intellect and erudition were transcended by the warmth of his personality. From the remotest rows of a lecture hall or from a hundred yards across a campus quadrangle, a humorous twinkle in his eyes would often be strikingly visible. Many of his close friends were the developmentally disabled people of South Bend’s Friends of L’Arche community, of which he was an active member and supporter.

McMullin is survived by his sisters, Maire O’Donnell of Mountcharles, Donegal, and Ailis Malone of Vancouver, Wash.

A funeral Mass will be celebrated Saturday, February 12, at 11 a.m. at Saint Agatha’s Church, Clar, Donegal. The family requests that memorial donations be made to Down Syndrome Ireland; Citywest Business Park; Old Naas Road; Dublin 12, Ireland.