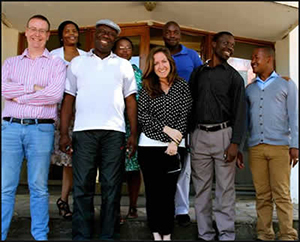 “All people deserve to live a life in dignity. Currently, many of the poorest and most vulnerable individuals in our world are not realizing that right.”

Kristen Kelly ’13 is driven by this simple and universal truth, one that she first discovered while pursuing an International Development Studies (IDS) minor through Notre Dame’s Kellogg Institute.

“I was surrounded by a community at Kellogg that allowed me to explore my interests, discover my passions, and develop the foundational hard and soft skills I needed to successfully enter into this field,” Kelly says.

“The Kellogg Institute—and the Ford Family Program in Human Development Studies and Solidarity in particular—planted the seeds of inspiration for the journey in international development that I now continue.”

Her journey began with two summers working in Nnindye Parish, Uganda, where she conducted research on the Ford Program’s community development projects. She credits these efforts with developing a core of hard skills—conducting interviews and focus groups as well as compiling and analyzing qualitative data—that have since made her a valuable staffer in several NGOs.

“Truthfully, though, what prepared me most for my time living and working in Africa since graduation are the softer, less tangible skills and tidbits of knowledge I hooked onto as an IDS student,” she acknowledges.

She developed a deep appreciation for some of development’s basic truths, which now guide her work in the field.

“Paths leading to dignity may look different across various contexts, but dignity must be held as a constant,” she says. 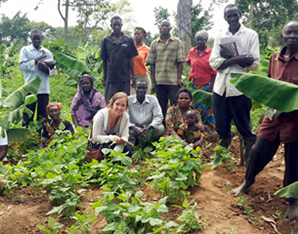 An anthropology major in Notre Dame’s College of Arts and Letters, Kristen now works for Voluntary Service Overseas (VSO), based in Pretoria, South Africa. VSO is Britain’s largest NGO utilizing only volunteers in the fight against poverty.

“We believe that it is only when people step forward—as local, national, or global citizens—that sustainable change happens. That’s a value instilled within me since my early days at Kellogg,” she says.

“Working at VSO, an organization which brings people together from across the world, has shown me the spark of creativity that ensues when people from different backgrounds come together to tackle our world’s toughest development challenges.”

As a business development officer, Kelly is tasked with supporting partnership growth within VSO’s Regional Health and AIDS Initiative for Southern Africa. Traveling throughout southern Africa, she seeks to raise additional funds for VSO’s work in healthcare.

Immediately following graduation, she worked as a program officer for the Pathways Development Initiative (PDI) in eastern Uganda.

“PDI’s mission is centered around holistic education for the community,” she says, “and it is dedicated to equipping individuals with the skills needed to build sustainable livelihoods and invest in the education of their children in order to break free from extreme poverty.

“For about six months, I called a small, rural district without running water or reliable electricity home,” Kelly recalls. “I am forever indebted to the people of Bududa for the lessons they taught me about the strength of community, the resilience of love, and the amazing power of human connection—transcending borders, languages, and cultures, in its purest form.”

Kelly greatly enjoys her current job and intends to continue pursuing a career as a development professional, wherever such work may take her. Humility and patience are essential to her work, allowing her to more deeply engage with people across projects, countries, and cultures.

“I have learned to embrace the humble nature of my knowledge and I maintain that approach as a way to constantly learn with and from the people around me,” she says.