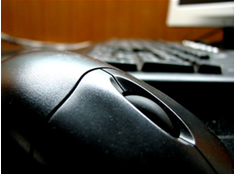 Fast-paced technological development, a hallmark of the 21st century, has created a new kind of political machine: cyberdemocracy.

Abbey recently co-authored with Dr. Sarah Hyde of the University of Kent at Canterbury, “‘No Country for Old Men’? Politically Active Seniors and ICTs.” The paper analyzes the findings from interviews with 26 senior political activists and their experiences with ICTs.

“On the one hand, by virtue of their age, they are less likely to use ICTs,” says Abbey. “On the other hand, the more politically aware a person is, the more likely he or she is to use ICTs in pursuit of political interests.”

“Indeed,” Abbey and Hyde conclude, “most of the seniors we interviewed had embraced the opportunities that ICTs have them to enhance their political activities.”

Abbey explains that the paper seeks “to make audible some of the voices from a generation of people who are typically neglected in the literature on cyberdemocracy.”

A member of the political science faculty since 2005, Abbey is currently working on a book titled The Return of Feminist Liberalism, which examines the renewed interest among some feminist thinkers in the possibilities of liberalism.

She states, “In every aspect of my professional life—research, teaching, service—coming to Notre Dame has been great for me.”