Wielding a gun increases a person’s bias to see guns in the hands of others, new research from the University of Notre Dame shows.

Notre Dame Associate Professor of Psychology James Brockmole, who specializes in human cognition and how the visual world guides behavior, together with a colleague from Purdue University, conducted the study, which will appear in an upcoming issue of the Journal of Experimental Psychology: Human Perception and Performance.

The researchers varied the situation in each experiment—such as having the people in the images sometimes wear ski masks, changing the race of the person in the image or changing the reaction subjects were to have when they perceived the person in the image to hold a gun. Regardless of the situation the observers found themselves in, the study showed that responding with a gun biased observers to report “gun present” more than did responding with a ball. Thus, by virtue of affording the subject the opportunity to use a gun, he or she was more likely to classify objects in a scene as a gun and, as a result, to engage in threat-induced behavior, such as raising a firearm to shoot. 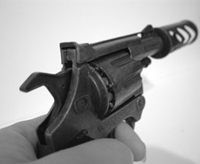 “Beliefs, expectations, and emotions can all influence an observer’s ability to detect and to categorize objects as guns,” Brockmole says. “Now we know that a person’s ability to act in certain ways can bias their recognition of objects as well, and in dramatic ways. It seems that people have a hard time separating their thoughts about what they perceive and their thoughts about how they can or should act.”

The researchers showed that the ability to act is a key factor in the effects by showing that simply letting observers see a nearby gun did not influence their behavior; holding and using the gun was important.

“One reason we supposed that wielding a firearm might influence object categorization stems from previous research in this area, which argues that people perceive the spatial properties of their surrounding environment in terms of their ability to perform an intended action,” Brockmole says.

For example, other research has shown that people with broader shoulders tend to perceive doorways to be narrower, and softball players with higher batting averages perceive the ball to be bigger. The blending of perception and action representations could explain, in part, why people holding a gun would tend to assume others are, too.