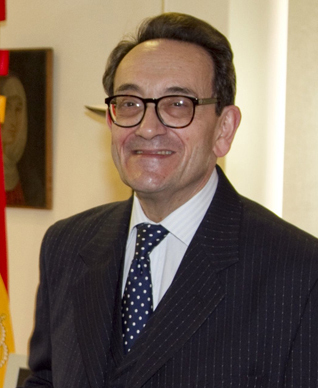 Felipe Fernández-Armesto, the William P. Reynolds Professor of History, has been awarded Spain’s highest honor for contributors to science, scholarship, education, and the arts: the Order of Alfonso X the Wise.

Spanish Prime Minister Mariano Rajoy bestowed the Grand Cross upon Fernández-Armesto at a ceremony at Madrid’s Prado Museum on February 27. The Grand Cross is the highest category of the Order, reserved for a maximum of 500 living individuals or institutions of extraordinary merit.

It is conferred by Royal Decree on the recommendation of Íñigo Méndez de Vigo, Grand Chancellor of the Order and Spain’s Minister of Education, Culture, and Sport.

In addition to his new title, Excelentísimo Señor, Fernández-Armesto received an insignia bearing a crimson sash with a pendant cross and a large pectoral cross of crimson and turquoise enamel. The latter is adorned with the image and seal of King Alfonso X “the Wise” of Castile (r. 1252-84), whose many contributions to learning and the arts include a cycle of hymns in praise of Our Lady, the Cantigas de Santa Maria.

“It’s no surprise that Felipe Fernández-Armesto — one of the pioneers of global history and someone we are very proud to have on our faculty — has won such a distinguished award.”

— John T. McGreevy, the I.A. O'Shaughnessy Dean of the College of Arts and Letters

The insignia of the Order of Alfonso X the Wise.

“The Order of Alfonso X the Wise is genuinely a group united by honest efforts to explore the unknown, create beauty, and speak truth," Fernández-Armesto said.

"I feel deeply honored to have been named among such as Plácido Domingo, the actress-director Concha Velasco, the venerable singer María Dolores Pradera, and the Chilean lettriste Jorge Edwards. I don’t know what I’ve done to deserve it, but it’s comforting to know that one’s efforts are appreciated.”

Fernández-Armesto, who currently teaches at Notre Dame's London Global Gateway, has won the World History Association Book Prize and Spain’s national prizes for geographical research and food writing: the Premio Nacional de Investigación and Premio Nacional de Gastronomía. He has written 20 books that have been translated into 27 languages, as well as a monthly column in Spanish daily newspaper El Mundo.

Fernández-Armesto’s teaching career has seen him go from the University of Oxford, where he earned his undergraduate and doctoral degrees, to the University of Notre Dame where he has taught since 2009. The London Global Gateway hosts his Global History class every spring.

“It’s no surprise that one of the pioneers of global history, someone we are very proud to have on our faculty, has won such a distinguished award," said John T. McGreevy, the I.A. O’Shaughnessy Dean of Notre Dame’s College of Arts and Letters.