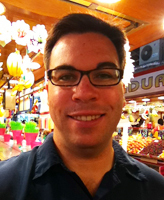 Adam Asher Duker, a graduate student in the University of Notre Dame’s Department of History, has been awarded a 2012 Fulbright to Switzerland, along with a Bourse de la Confédération Suisse.

The Fulbright U.S. Student Program funds up to a year of research and study abroad in more than 140 countries. Approximately 1,000 winners are selected each year, based on their academic and leadership potential.

“I am thrilled for the opportunity to continue my research in Geneva this year,” says Duker, whose dissertation is tentatively titled “Providence Under Pressure: Israelite Identity and Siege Warfare in France and Geneva, 1562-1602.”

Duker’s research examines how different confessional communities understood themselves through the lens of the Hebrew Bible, and how the meaning this Israelite identity changed along with the fortunes of Catholic and Protestant armies during the course of the religious wars.

“I hope to reconstruct and critically examine how Christians during the Reformation era sought to monopolize the identity of ancient Israel, and how this identity had the power to both inflame and pacify confessional violence,” he says. “By understanding the discourse and modes of thought of these Christians, I intend to identify how specific aspects of religious belief and identity inspired confessional hostility. My research will forward our understanding of the rhetoric and reality behind religious warfare in early modern Europe.”

Duker will spend the 2012-2013 academic year at the Institut d’Histoire de la Réformation (IHR), which is housed at the Université de Genève.

“The IHR boasts some of the best faculty and one of the best research collections in Reformation studies,” Duker says. “I have had the opportunity to participate in the IHR’s cours d’été seven times over the last four years and have benefited immensely from the focused seminars led by Professors Irena Backus, Philip Benedict, Maria-Cristina Pitassi, and Daniella Camillocci, among others. I look forward to spending nine uninterrupted months conducting research in Geneva.”

In addition to the Fulbright and Bourse de la Confédération Suisse fellowships, Duker received a multi year Harvey Fellowship in 2010. He also won the 2011 Carl S. Meyer Prize from the Sixteenth Century Society and Conference (SCSC) for a paper titled “The Hermeneutics of Emotional Restraint: Calvin’s Pastoral Theology of Imprecation in Comparative Context.”

The Meyer Prize is awarded—not necessarily every year—for the best research paper presented by a graduate student or assistant professor at the previous meeting of the SCSC. The prize includes recognition in The Sixteenth Century Journal, and the opportunity to publish a revised version of the conference paper in the journal.