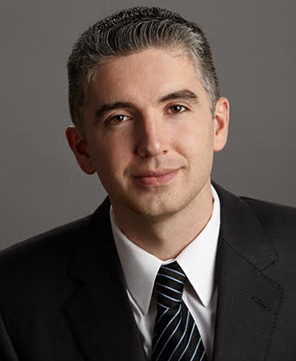 Soon after graduating from Notre Dame, Patrick Burke ’06 found himself juggling three roles—scout for the Philadelphia Flyers, law student, and co-founder of a nonprofit organization.

If ever there was a time when he needed to communicate well and quickly, this was it.

In his seven years as an NHL scout, Burke watched high school and professional hockey games, writing reports on players he felt the team should draft or sign. At night, he went to the New England School of Law, graduating in 2013. In whatever time he had left, he worked to create You Can Play—an organization aimed at fostering an inclusive environment in professional and collegiate athletics.

Whether the topic was hockey or law or diversity, Burke found himself calling upon skills honed during his time as a history major in the College of Arts and Letters.

“It taught me how to write concisely and effectively,” he said, “to get my point across without taking 15 pages to do so.

“The ability to write persuasively has universal applications. My communication skills have made me a valuable asset, a good employee, and a good boss.”

Burke, who now serves as president of You Can Play, co-founded the organization in honor of his late brother, Brendan, who was openly gay and worked as a student manager for Miami University’s hockey team. Brendan Burke was killed in a traffic accident in 2010.

You Can Play, which has been honored by ESPN and the National Education Association, seeks to ensure the safety and inclusion of everyone in sports—including LGBT athletes, coaches, and fans.

The organization works to guarantee that athletes are given a fair opportunity to compete, judged only by what they contribute to the sport or their team.

Burke attributes part of You Can Play’s early success to its memorable slogan, which he coined after writing a piece for Outsports.com about his brother’s legacy—“If you can play, you can play.”

“It’s a great tagline, and a simple marketing pitch,” he says. “Everyone can remember it.”

The goals of You Can Play have been embraced by several professional sports leagues in the U.S. and Canada, as well as many colleges and universities, including Notre Dame. Leaders of the organization were also asked to represent the U.S. at a session of the United Nations Human Rights Council in Geneva last year.

As a champion for its cause, Burke has written articles on sports and the LGBT community that have appeared in the Washington Post, USA Today, and other publications.

One piece Burke wrote for Buzzfeed discouraged athletes from boycotting the 2012 Winter Olympics in Sochi due to Russia’s stance on LGBT rights. It encouraged athletes to “show the world that there are elite LGBT athletes who are not afraid to be themselves, on and off the playing field,” and examined previous protests and boycotts of Olympics games.

“I have been able to get my thoughts out there on an international stage because I am comfortable sitting down and writing a paper,” Burke said. “For that Buzzfeed article, I did research like any college student would have, and as I did at Notre Dame.”

In 2013, Burke became director of player safety for the NHL, where he oversees a staff of 10. His department handles disciplinary actions against players for in-game conduct and ensures the league is using the safest hockey equipment, recommending specific types of gear proven to reduce risk of injury.

Whether the group is recommending a new type of equipment or explaining a given penalty for a player, they must support their actions with evidence and a clear argument, Burke said. They read lengthy research papers on various equipment and watch every NHL hockey game to justify why they enforced a particular disciplinary step.

“We’re not very popular, because when we make our decisions, one team thinks we didn’t suspend a player long enough, and the other thinks we were too harsh,” Burke said.

“At the end of the day, we have a tough job, but we do a good job of explaining our decisions. It’s basically what being a history major is all about.”

As a freshman at Notre Dame, Burke intended to major in business, but after one class, he decided to focus his studies on the topic he had always enjoyed growing up—history. He took classes on the Vietnam War, World War II, and the Holocaust.

“It was stuff that fascinated me,” Burke said. “We would get 10 books that took one event and gave you 10 different perspectives, and we got to sit down and read all of them. I was in heaven.

“I wanted to spend my four years doing something I was passionate about. I figured if a company didn’t want to hire me because I hadn’t taken a certain calculus or statistics class, then that job probably wasn’t for me anyway.”

Nearly 10 years into his professional career, Burke has found his study of history—and the skills he gained in writing, speaking, and forming an argument—often set him apart from his peers in business.

“The history major has so many practical applications in the corporate world,” he said. “I could change jobs tomorrow, and I’m convinced I would make myself an asset based on those skills.”