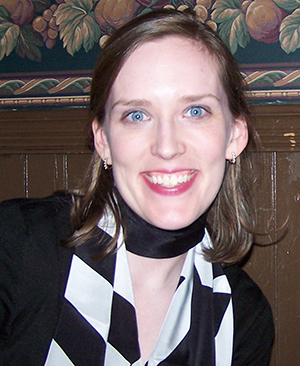 “Detroit was the seaport of the West, located in the heart of the Great Lakes,” said Cangany, assistant professor in the Department of History. “During the 18th century, it functioned in all the ways that a larger Atlantic seaport like Boston or Philadelphia did.”

Founded by the French explorer Cadillac in 1701, Detroit was also a culturally, religiously, and racially diverse community from its beginning, she said. “Cadillac envisioned the settlement as a place where French and various native groups would live and trade together.” By the time of the American Revolution, there also were substantial populations with British and African ancestry.

After the Great Fire of 1805, when Detroit burned to the ground, it was rebuilt in an East Coast metropolitan style. Although it no longer looked like a French colonial city, Cangany said, it clung to its frontier and French associations and behaviors.

“Even as late as the 1830s, Detroit continued to be seen by many Americans as ‘foreign,’ despite having been part of the United States since 1796.” 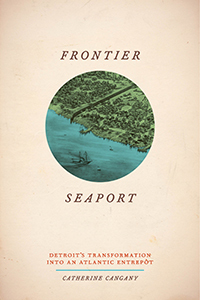 When Detroit was founded in the early 18th century, Europe had nearly exhausted its supply of fur-bearing animals and looked to its American colonies for alternative sources.

The city was soon at the center of the prosperous fur trade, Cangany said, linking the American frontier with distant countries.

“Raw goods from Detroit were exported to Europe, where they were made up into hats, gloves, and other articles,” she said. “Some of the finished products returned to the Americas, but most were dispersed throughout Europe and to points further east—to Russia and China.”

That industry had nearly vanished by the time Michigan became a state in 1837. The infrastructure left behind by the fur trade, however, helped Detroit retool as it transitioned into manufacturing—first, ‘frontier’ goods like moccasins, then stoves, and more recently automobiles and munitions.

An Empire of Fakes

Cangany’s research on these frontier goods inspired her current project, An Empire of Fakes: Counterfeit Goods in Eighteenth-Century America.

“When I was working on the Detroit book in 2008, moccasins were all the rage again in the U.S. and in France—a trend that harkens back to colonial Detroit,” she recalled.

“As with modern moccasins, many of which are made in China, one of the things that fascinated me about colonial moccasins was their ‘counterfeit’ nature.

“These native-style shoes had been produced almost entirely by Detroit’s white population but were marketed to white East Coasters as authentic, native-made footwear. That made me wonder about what other kinds of counterfeited and adulterated goods existed in the 18th and early 19th centuries.”

A Hope for Better Things

Cangany, who specializes in the cultural and economic history of the early United States, won a fellowship from the American Council of Learned Societies to conduct research on colonial counterfeit goods for the 2013-14 academic year.

As for Detroit today, Cangany said, “The current city motto—Speramus meliora resurget cineribus—is a Latin phrase meaning, ‘We hope for better things; it will rise again from the ashes.’

“It was coined during the Great Fire, when Detroit almost entirely burned to the ground. Although a lot of scholars have rightly noted the motto’s apt foreshadowing of Detroit’s fiery race riots in 1863, 1943, and especially 1967, we have been slower to recognize that it just as aptly encapsulates the cyclical nature of Detroit’s economy.”