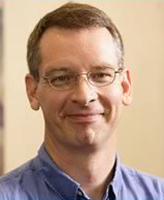 University of Notre Dame historian Brad Gregory has been awarded the inaugural Aldersgate Prize for Christian Scholarship for his latest book, The Unintended Reformation: How a Religious Revolution Secularized Society.

“Gregory’s wide-ranging and synthetic study is a model of Christian scholarship that challenges reductionist tendencies among historians and illuminates the character and genealogies of some of the fundamental dysfunctions of contemporary society,” says David Riggs, JWHC executive director.

“As the inaugural recipient of the Aldersgate Prize, The Unintended Reformation has set an extremely high standard for the future years.”

Gregory, the Dorothy G. Griffin Collegiate Chair in Early Modern European History, says he was delighted by the honor.

“I am sure that there were many other worthy books from among the approximately 80 nominated, which makes me all the more grateful to have The Unintended Reformation singled out in this way,” he says. “It is gratifying to have colleagues recognize the achievement of a book that is ambitiously revisionist, challenging, and provocative.” 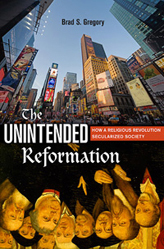 Gregory’s research traces the relationships among religion, science, politics, morality, capitalism and consumerism, and higher education from the Middle Ages through the Reformation era to the present.

“Because 16th- and 17th-century Christians could not agree about what was true, right, and good, modern individuals were eventually permitted to determine these things for themselves,” Gregory says. “And as long as most people still continued to agree about basic moral views and political assumptions despite their religious differences, such politically protected individual freedoms could contribute positively to the robust functioning of a democratic society.”

But, Gregory argues, fundamental disagreements today about how we should live and the lack of a shared view of the common good—due, in part, to the proliferation of divergent secular and religious views—tends to cause friction and faction when those freedoms are exercised.

In notifying Gregory of his award, Indiana Wesleyan University Provost David Wright said, “Our selection committee believes your book best ‘demonstrates how rigorous Christian thought is brought to bear on disciplinary or interdisciplinary forms of scholarly engagement.’ Our committee members noted their significant respect for both the breadth and the depth of the details defining your work.

“Summing up many of their perspectives, one member of the committee went so far as to remark that your work was ‘magisterial’ in nature.”

Gregory will receive a monetary prize, an engraved glass sculpture from Kokomo Opalescent Glass, and the opportunity to offer the keynote address at the April 18, 2013 IWU Faith and Learning Luncheon.