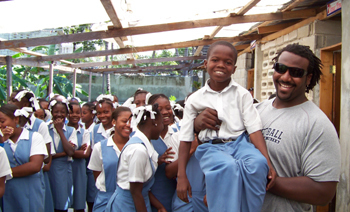 Lymphatic filariasis is a parasitic disease caused by microscopic, thread-like worms (Wuchereria bancrofti and Brugia malayi). The disease, which is transmitted by mosquitoes, can cause swelling and decreased function of the lymph system, making it difficult for the body to fight germs and infections. Affected persons will have more bacterial infections in the skin and lymph system, causing hardening and thickening of the skin, known as elephantiasis. Lymphatic filariasis affects more than 120 million people in 80 countries throughout the tropics and subtropics of Asia, Africa the Western Pacific and part of the Caribbean and South America.

Not a disease you want to mess around with, right?

Chris Stewart, an offensive guard on for the University of Notre Dame’s Fighting Irish, didn’t seem to mind. In fact, it was lymphatic filariasis that drew him to Haiti in the first place.

During his freshman year at Notre Dame, Stewart took a class on communicable diseases with Rev. Tom Streit, C.S.C., director of Notre Dame’s Haiti Program, During the course, Father Streit discussed eradicating lymphatic filariasis and these classroom discussions piqued Stewart’s interest in the disease and the perils of one of the poorest nations in the world.

“After I took that class, I was more interested in the Notre Dame Haiti Program and, especially, the projects they were doing,” Stewart says.

As a history major, Stewart had the opportunity to study the country and the diseases that have affected it. Over spring break this year, he was given the chance to visit Haiti and see firsthand the projects begun by the program.

During his weeklong visit to Haiti, the Spring, Texas native conducted research, learned the logistics of the Notre Dame Haiti program and toured facilities geared toward eradicating lymphatic filariasis.

“It was a great experience to go down there as part of the program,” Stewart says.

Thanks to groups like the Notre Dame Haiti Program, lymphatic filariasis is now one of the infectious diseases most likely to be eradicated in the coming years. In Haiti, infected patients can take a pill to completely rid themselves of parasitic worms. There are some issues with mass drug administration, so the Notre Dame Haiti program and its partners use a salt fortification program in addition to medications. Fortified salt must
be manufactured and distributed throughout Haiti, since salt in the area does not contain iodine, a key nutrient in brain development.

But it wasn’t just the illness that brought Stewart to Haiti.

“One thing I studied in my concentration with Haiti is this interesting dynamic. Haiti started out as a French colony, as the richest colony of all colonies. So this little island produced 10, 20, 30 times the wealth as the Americas, India, and numerous other places. How does this country go from all this wealth to being the poorest nation in the Western hemisphere?” he wondered.

Although seeing the disease up close had an affect on Stewart, it was the poverty that truly changed him.

“I’m from a lower-middle class background. I’ve seen poverty before, but there’s nothing like seeing an entire nation so poor. This nation has relatively no money. Something like 80 percent of the country is below the poverty line. I’ve never seen poverty on that scale,” Stewart recalls.

However, Stewart noticed one big thing about the people of Haiti that greatly affected his perception of the destitute nation.

“One of the things that shocked me was that these people were so poor, but they still lived despite their hardships. We went to an outdoor concert while we were there. Kids were always smiling. These kids that have nothing, maybe rags if that,” Stewart says. “They live life from day-to-day. They know they’re not promised, so they just focus on today.”

The trip to Haiti has Stewart reconsidering his career path. With hopes of attending law school after his football-playing days have ended, Stewart is considering a career in social service and using his degrees to help the people of Haiti.

“I’d definitely like to be involved in the (Notre Dame Haiti) program and do some real-world work if I had the chance,” Stewart says.

Stewart’s efforts in the classroom may very well contribute to the realization of that dream. He graduated in May with a 3.536 cumulative grade point average and a degree in history. He earned above a 3.5 grade point average in three different semesters, including the 2009 spring semester in which he finished with a 3.834 average. He currently is enrolled in graduate studies at Notre Dame.

“Being here has taught me you just have to go hard in as many different directions as you can without spreading yourself too thin before the doors close," Steward says. "There’s no reason not to.”

For more information about the Notre Dame Haiti Program, visit http://haiti.nd.edu on the Web.

Originally published by Stephanie Fischer at newsinfo.nd.edu on October 02, 2009.