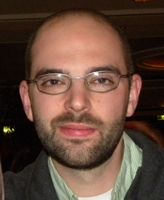 Although talk of extinction is often focused on plant and animal life, graduate student Myles Beaupre is researching what it means when extinction applies to an entire race of people.

Beaupre, a doctoral candidate in the Department of History, is studying government policies on Native Americans throughout the development of the United States—from the British Empire-controlled colonies to the mid- to late-1800s of the newly formed country.

“Historians have typically understood the debates about the origin, nature, and future of ‘Indian difference’ in 19th century America as part of an imperialist rhetoric to naturalize and justify the appropriation of the continent,” he says. “There is no denying that these debates played this rhetorical role, but they were more than this.”

Beaupre’s dissertation looks deeper into the different scientific and cultural theories espoused by European Americans in their dealings with Native Americans. “Government polices,” he says, “embodied these changing explanatory schemes and the different futures they imagined.”

Beaupre became interested in researching Native American policies after having a conversation with a friend about Thomas Jefferson’s rejection of the theory of extinction and his continued search for the woolly mammoth.

“It got me thinking about how contested the idea of extinction was at the beginning of the 19th century but how quickly and easily the term came to be used to describe the fate of Native Americans,” he says.

So Beaupre immersed himself in researching documents at the National Archives and Library of Congress in Washington, D.C. With help from a Graduate Student Research Award from Notre Dame’s Institute for Scholarship in the Liberal Arts, he was also able to pore over personal papers and records from the Bureau of Indian Affairs, War Department, and Department of the Interior.

“Despite all the electronic resources we have at our disposal, the bulk of my research is still sitting at a table or microfilm machine trying to read handwritten letters,” he says.

These first-hand materials shed light on more than just a subject; they also provide a unique way to look into the lives of the people who wrote them. “I am always amazed at the amount of writing the individuals I examined did on a topic that for many was a hobby and the obvious pleasure they took in writing and thinking about their interests.”

With his research, Beaupre plans to both document and explain changing government policies on Native Americans. Over time, the United States employed three key strategies for dealing with Native Americans and their cultural and physical differences: assimilation, extinction, and, finally, evolutionary development.

“These ‘sciences of Indians’ attempted to explain difference by uncovering their past but premised on the need to define their future,” Beaupre says.

How European Americans explained differences between themselves and Native Americans helped define Indian policies. “Ideas can be traced historically both as a process of intellectual development and as the practical application of those ideas in the world,” he says. “To focus on one while excluding the other robs our attempts to understand the world and its moral complexity.”

Beaupre has also set out to show that the government’s actions should not be overly simplified. “I hope in linking the intellectual and social history of various ideas about Native Americans to show that understanding past relationships between thought and action is, ultimately, much more important than tracing causal relationships.

“That is not to say that we should not judge the past and make moral claims about it,” says Beaupre, “but judgment must follow understanding—not precede it.”