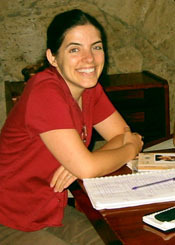 Shannon Drysdale Walsh, a doctoral candidate in Notre Dame’s Department of Political Science, has received an Andrew W. Mellon/ACLS Dissertation Completion Fellowship from the American Council of Learned Societies. The fellowship provides a stipend and research fund and covers university fees in the final year of dissertation work.

Titled “Engendering State Institutions: State Response to Violence Against Women in Latin America,” Walsh’s dissertation explains variation in the development and practices of the policy agencies, police units, and courts that address violence against women in Guatemala, Nicaragua, and Costa Rica.

As Walsh notes, “countless women in Central America have been murdered, raped, or subjected to repeated abuse with little chance that the perpetrator will be punished or that they will find protection.

“Although all Latin American countries have increasingly established legal norms to criminalize violence against women,” she says, “there is a lot of variation in the extent to which states have begun to further institutionalize responses to this violence and to implement effective measures to protect victims and survivors. Obstacles to building state institutions in order to strengthen women’s security rights include a general lack of political will and resources.

“One implication of this study,” Walsh says, “is that, on the whole, norms addressing violence against women are implemented to the degree that international organizations successfully coordinate with local advocates, building capacity within the state and civil society to provide services and protection for victims of violence. Well-coordinated efforts have resulted in some significant improvements, such as the development of specialized women’s police stations in Nicaragua that are exclusively staffed by women. State-building is often viewed as an activity undertaken primarily by state actors, but this study points to the importance that non-state actors have in constructing state institutions that protect marginalized groups.”

In support of her work, Walsh also received a Fulbright-Hays Fellowship to conduct research in Central America, with host institutions at the Universidad de Centroamérica in Nicaragua, the Universidad de Francisco Marroquín in Guatemala, and the Estado de la Nación in Costa Rica from 2007 through 2008.

The Andrew W. Mellon Foundation/ACLS Early Career Fellowship Program provides support for young scholars to complete their dissertation and, later, to advance their research after being awarded the Ph.D. The program is supported by a grant from the foundation, whose grant-making philosophy is to “build, strengthen, and sustain institutions and their core capacities.”

ACLS is a nonprofit federation of 70 national scholarly organizations, created in 1919 to represent the United States in the Union Académique Internationale (International Union of Academies). Its mission is “the advancement of humanistic studies in all fields of learning in the humanities and the social sciences and the maintenance and strengthening of relations among the national societies devoted to such studies.”