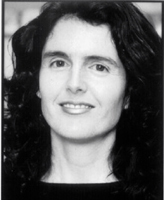 Anne García-Romero, an assistant professor at the University of Notre Dame, has been accepted to the prestigious Eugene O’Neill National Playwrights Conference this summer.

One of just eight playwrights selected out of nearly 1,000 applicants, García-Romero will spend the month of July at the Eugene O’Neill Theatre Center in Connecticut, working with acclaimed theatre professionals to workshop her play Provenance. Also among the honorees is Notre Dame English alumna Theresa Rebeck ’80, an award-winning playwright and creator of the television show Smash.

The Eugene O’Neill National Playwrights Conference is one of the top playwriting development programs in the nation and is known for “developing new American plays that often go on to have a successful trajectory in the U.S. theatre,” García-Romero says.

“The O’Neill has a high national profile—because of the history of the conference, because of how selective it is—so this opportunity is a huge honor.”

Inspired by the works of Mexican painter Martín Ramírez, Provenance is the story of two Mexican-American sisters living in Los Angeles, García-Romero says. “They learn that their Mexican great-grandfather was a painter whose work is now very valuable. They receive a stolen painting of his and have to decide—are they going to sell or keep the painting?”

At the Eugene O’Neill Theatre Center, García-Romero will work with Los Angeles-based director Juliette Carrillo, Washington DC-based dramaturg John Baker and a company of New York actors. Together, she says, this team will explore the text of the play, reading it aloud, discussing the script, asking questions, and making suggestions. “Then at some point we’ll get an idea of how this play works with physical bodies in time and space.”

Because the final public presentation is script-in-hand, García-Romero will be able to respond to these experiences by adding or changing a scene, rewriting lines, or making other revisions right up to the last day.

“This opportunity is really about exploring a new script and working with talented and experienced theater artists, who can give the playwright feedback and guidance,” she says.

“Many influential theatre artists are a part of the support and the organization of the O’Neill, so for me as a playwright it’s also significant because it allows my play to join a larger national conversation.”

Bringing a Story to Life 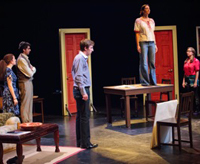 A scene from the student-driven workshop production of Provenance.

García-Romero joined the Department of Film, Television, and Theatre in fall 2010 as part of the University’s inaugural class of Moreau Academic Diversity Postdoctoral Fellows. The program, she says, was integral to the development of Provenance.

“I wouldn’t have written the play right now if it hadn’t been for the Moreau, and I know the play wouldn’t be as far along in the writing process as it is without the experience here at Notre Dame. I’m sure of that.”

During the first year of her fellowship, García-Romero conducted research in Mexico, New York, and California, then wrote the initial script and held a first table reading of the play. After more revisions, rehearsals began for a student-driven workshop production of Provenance in fall 2011 in the Regis Philbin Theater, which gave her an opportunity not only to see the script come to life for the first time but also to experience an audience’s reactions.

“I accomplished so much in the student workshop production,” García-Romero says. “I’m going into this summer experience at the O’Neill with a script that I feel is really so much stronger.”

The happy ending to her two-year Moreau fellowship, she says, was an invitation to join the FTT faculty as an assistant professor.

“I knew from the start that Notre Dame was a good fit for me in terms of the work that I do—as a playwright and a scholar. My department here allows me to be both and recognizes my work in each area. There’s such a remarkably supportive environment, the resources are outstanding, and I’m right by Chicago, which is a theatre hub.”

A New Dramatists alumna and author of 25 plays, García-Romero holds a Ph.D. in theatre studies from University of California, Santa Barbara. She is currently working with actor/director Andy Garcia to adapt one of her earlier works, Mary Peabody in Cuba, into a screenplay and is finalizing a book called Contemporary Latina Theatre: Transcultural Voices.

Her book, she says, is a study of five award-winning Latina playwrights in the 21st century, many of whom come from multicultural backgrounds. “I consider plays from each of these playwrights and how their work reflects intersections of cultures—and how this informs their exploration of identity, spirituality, and theatrical experimentation.”

In addition to the Eugene O’Neill National Playwrights Conference, García-Romero is preparing for the world premiere of her play Paloma at the National Hispanic Cultural Center this summer—and getting ready to teach two fall courses in Notre Dame’s College of Arts and Letters.

One course will focus on contemporary Latina playwrights; the other, called New Play Process, will engage students with working playwrights who have offered to share their unpublished plays with the class.

She also plans to continue ND Playwrights Now, a program she began in spring 2011 in which undergraduate playwriting students have selections of their work performed on stage before a live audience.

“It’s really been a privilege to work with the students here at Notre Dame,” says García-Romero, who taught both playwriting and script analysis while a Moreau fellow. “The students are very engaged in the learning process.

“My students have been so willing to take risks in their creative and intellectual growth and have a sincere desire to grow as both scholars and artists. I’m grateful for the opportunity to continue to contribute to the Notre Dame community.”