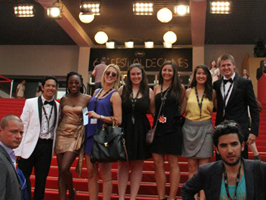 Networking with industry insiders, watching highly anticipated films, walking the red carpet, and seeing stars was all part of the job for a group of University of Notre Dame students who jetted off to the 2012 Cannes International Film Festival this summer.

Working with Assistant Professor Aaron Magnan-Park, the students from the Department of Film, Television, and Theatre (FTT) were granted the exclusive right to make a documentary about the internship program at the festival’s American Pavilion—an opportunity that provided a rare, behind-the-scenes look at the premier event in international film.

“There was always a frenzy,” says senior Erin Moffitt. “There’s a certain chaos to it because everyone comes with certain aspirations and goals they want to be achieved by the end. So there are people trying to distribute movies, people trying to get into movies; the range of people you meet there is extraordinary.” 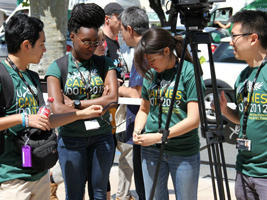 It was also a great opportunity, Eshun says, to demonstrate the talent and professionalism of Notre Dame’s film program. “Being there, being those Notre Dame kids who were always shooting everywhere, we definitely had an impact,” she says. “Everyone around us knew we were really dedicated to our project and that really made a name for Notre Dame in the American Pavilion and the internship program.”

But while the setting may have been glamorous, shooting in Cannes at the festival was a real challenge because so many things were going on at once, from star-studded red carpet events, press conferences, and screenings to the constant flurry of business and networking activity that takes place during the annual gathering. And, of course, there are the real-world surprises inherent in any documentary project.

“You can plan as much as you want,” Moffitt says, “but rain will come when you want to shoot outside, a surprise guest will appear somewhere but you suddenly can’t get through to that area. With documentary, you always have to stay on your toes. You have to be ready for anything.” 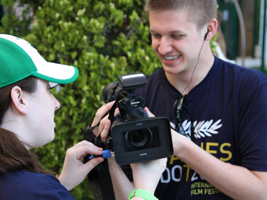 Solid teamwork was a key to the project’s success, says Erker, who served as a co-producer with Moffitt and Ott. “I have never before been dropped in a group that simply works so well together,” he says. “We worked incredibly long hours but were able to maintain the right attitude throughout the grueling days.”

And the work didn’t start or stop at Cannes.

Along with Magnan-Park, who served as executive producer, the team met regularly during the 2011-12 academic year to design the overall aesthetics of the film, write the shooting script, determine equipment needs, and work out other logistics. They also shared all pre- and post-production duties.

The final project took three forms: The Festival, a documentary that promotes Cannes, the American Pavilion, and the benefits of interning there; a package of featurettes that focus on the specific types of internships available; and a trailer that can also be used as an introductory audiovisual clip when American Pavilion representatives visit college campuses.

“As much as it was an enriching experience for us as individuals, as a team, and as a University,” Magnan-Park says, “the larger mission was to present this opportunity for a global audience so that other people who are equally impassioned about cinema and want a career as filmmakers or in production, exhibition or distribution—or on the academic side—will discover the internship program.” 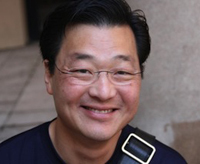 Magnan-Park and the entire team say they are proud to play a role in raising the international profile of Notre Dame’s film department.

“It really showcases our drive and passion,” Moffitt says. “Any other school could have thought of this project, but they didn’t. We did. And not only that, we got full funding from the University.”

Indeed, the project received support from across the University, including the Center for Creative Computing, Center for Undergraduate Scholarly Engagement, College of Arts and Letters, College of First Year Studies, DeBartolo Center for the Performing Arts, FTT, Institute for Scholarship in the Liberal Arts, Multicultural Student Programs and Services, Nanovic Institute for European Studies, and Office of Campus Ministry.

In return, participants returned from Cannes with valuable hands-on experience in film production, insight on the international film world, a new understanding of the various career paths available within the industry, and—perhaps most important—inspiration.

“Being in film, being committed to film, the ultimate destination is always Cannes,” Magnan-Park says. “And what is beautiful about this is that the students got to experience it early in their careers so they know already what it is about. Now, after the documentary, they will be able to find their own path to make it there again on their own, sooner rather than later.
“It’s not an impossible dream. They have been there once; a return trip is almost guaranteed.”