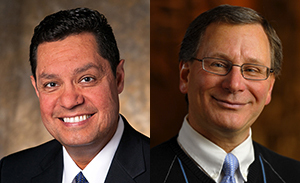 Luis Ricardo Fraga, a pioneer in the field of Latino politics, and Timothy Matovina, a leading expert on Latino Catholicism, have been appointed co-directors of the University of Notre Dame’s Institute for Latino Studies, effective July 1, 2015.

“The combination of skills that they bring to the institute is spectacular,” said John McGreevy, I.A. O’Shaughnessy Dean of the College of Arts and Letters, where ILS is housed. “Luis, as a political scientist who has recently returned to Notre Dame and Tim, as a theologian who is a longtime valued member of the Notre Dame faculty, are already a great team.

“They are going to accelerate the impressive development that has marked the Institute’s recent history.”

Established in 1999, the interdisciplinary Institute for Latino Studies (ILS) advances understanding of the fastest-growing and youngest population in the United States and in the U.S. Catholic Church and strengthens Notre Dame’s mission to prepare transformative leaders committed to building a future where Latinos thrive in the United States.

Fraga, the Professor in Transformative Latino Leadership, a professor in the Department of Political Science, and a fellow in the Institute for Educational Initiatives, joined the faculty in fall 2014. He studies the politics of race and ethnicity, Latino politics, immigration policy, education politics, voting rights, and urban politics. His most recent book Latinos in the New Millennium: An Almanac of Opinion, Behavior, and Policy Preferences, creates a comprehensive profile of Latino political life in the United States. Fraga is also a member of President Obama’s Advisory Commission on Educational Excellence for Hispanics, where he co-chairs the Postsecondary Education Subcommittee.

Matovina, a professor in the Department of Theology, specializes in U.S. Catholic and U.S. Latino theology and religion. His most recent book, Latino Catholicism: Transformation in America’s Largest Church won five book awards. Matovina has served as executive director of ILS since 2012. Prior to that, he spent 10 years as director of Notre Dame’s Cushwa Center for the Study of American Catholicism. Matovina has won two teaching awards at Notre Dame, including the Julian Samora Award which the La Alianza student organization confers on a faculty member whose research, teaching, and service advance knowledge and empowerment of Latino/a students and communities.

“The mutual influence of Catholicism and Latinos in the United States is shaping not just the future of American Catholic life, but also the life of the nation,” Matovina said. “ILS has played a leading role in addressing the challenges and opportunities of these transformations, and I look forward to collaborating with Luis to further enhance the mission of the Institute and of Notre Dame.”

The new leadership team plans to focus on recruiting faculty and developing new programs. A particular focus is a new Latino leadership program for students from all backgrounds who are interested in Latino issues, and creating an even stronger community of undergraduates and graduate students with interests in Latino studies.

“There is already a great deal of attention being paid to the role that Latino voters will have in the upcoming 2016 Presidential election,” Fraga said. “Their growth across the country has the potential to greatly influence how many aspects of American politics evolve over the next 20 years. Similarly, their growth has already transformed how the Catholic Church sees its own future in the U.S.

“Tim and I will work tirelessly to make sure that the Institute for Latino Studies and Notre Dame are at the forefront of the most constructive, insightful, and engaged thinking about these important and complex transformations in our society.”

In announcing the new appointments, McGreevy also praised the work of Notre Dame Professor of American Literature José Limón, who has served as ILS director for the past three years. “We are deeply grateful for José’s efforts,” he said.

The Institute for Latino Studies has built tremendous momentum in recent years, McGreevy said, and it plays a vital role in the academic mission of the College and the University.

“I look forward to working with Luis and Tim to help us become the premiere Institute for Latino Studies in the nation.”