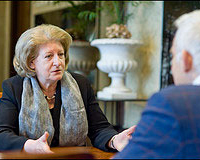 Hanna Suchocka, former prime minister of Poland and former ambassador to the Holy See, will deliver the 2014 Nanovic Forum Lecture at 5:30 p.m. on Tuesday, March 4 in the Carey Auditorium in the Hesburgh Library at the University of Notre Dame.

Sponsored by the Nanovic Institute for European Studies, the lecture, titled “Democratic Poland: 25 Years After the Fall of Communism,” is free and open to the public. The event is also part of the 2013-14 Notre Dame Forum on Women in Leadership as Suchocka was the first female prime minister of Poland. Suchocka will also participate in a luncheon and lecture hosted by the Nanovic Institute at Notre Dame’s Chicago Commons in downtown Chicago later in the week.

Born in Pleszew, Poland, Suchocka studied constitutional law at the Adam Mickiewicz University in Poznań. She taught at the Catholic University of Lublin before joining the Polish parliament as a member of the Democratic Party in 1980. After voting against a law that banned Solidarność, a Polish trade union, she was expelled from the Democratic Party. In the post-Communist parliament after 1989, she again held office and earned a reputation for transcending political divides. In 1992, she was asked to serve as prime minister and instituted reforms that shaped Poland’s economic transition to capitalism. She left office in 1993 and was later appointed Minister of Justice under Prime Minister Jerzy Buzek. She spent more than a decade in Rome as well, serving as ambassador to the Holy See during the papacies of John Paul II, Benedict XVI, and Francis. Today she serves as a member of the Council of Women World Leaders.

The Nanovic Institute for European Studies established the Nanovic Forum through the generosity of Robert and Elizabeth Nanovic to deepen Notre Dame’s rich tradition of connections to Europe by bringing prominent figures to campus in a wide range of fields to explore, discuss, and debate the most pressing questions about Europe today. Past speakers have included Lord Patten of Barnes, Chancellor of the University of Oxford; Horst Koehler, former president of Germany; Bernhard Schlink, a German novelist and constitutional court justice; and Wolfgang A. Herrmann, president of the Technical University of Munich.

More information on Hanna Suchocka’s visit and an archive of past lectures is available at nanovic.nd.edu/forum.