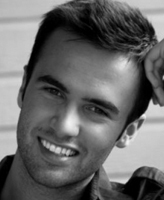 Filming in and around 8,000 sheep, directing first-time actors who also happen to be immediate family, and scrambling across badger-ravaged fields on dark December nights—it’s all part of the movie-making process for senior Film, Television, and Theatre student Javi Zubizarreta.

Over the course of his undergraduate career at Notre Dame, Zubizarreta spent a great deal of time following sheep with his camera, most recently for his senior thesis project, Zuretzako (For You). The film illuminates the complex relationships between two generations of Basque sheepherders working in Idaho. Zubizarreta’s father and younger brother, who speak the Basque language in the movie, portray the two main characters.

“The film is the story of my grandfather,” he says, “and the sacrifices he made for his family. He first came to America at a young age to herd sheep, eventually returning to the Basque and having a family only to have to leave them again to herd in Idaho. Eventually, his own son joins him. After years apart, father and son have to reconcile the rift between them that 20 years apart has created. It’s a story of the sacrifices that fathers make and the toll it takes on their sons.” 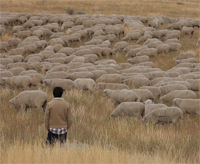 The project grew out of a documentary Zubizarreta made with fellow student Jacob Griswold during the fall of his junior year. That film, Artzainak: Shepherds and Sheep, also illuminates the difficult lives of immigrant sheepherders in Idaho.

Because of his family history, Zubizarreta says he particularly enjoyed making that film and getting a chance to show it to audiences around the world.

“At a premiere, you never watch the movie, you watch the audience to see their reaction,” he says. “It’s such an amazing experience to hear and see it like that, to be able to share with hundreds of people.”

Artzainak screened at film festivals in the United States, Ireland, Czech Republic, France, India, and New Zealand, and it was a finalist at a festival in Spain.

The documentary, along with clips from other projects he completed while at Notre Dame, helped Zubizarreta win a prestigious 2010 Princess Grace Award. He was the only undergraduate among the six winners of the national filmmaker prize.

“It’s really an amazing award,” he says. “It’s a big stamp of approval from qualified people in the industry saying ‘we want to see more from you.’ I still can’t believe I got it. It was emboldening going into this senior thesis project.” 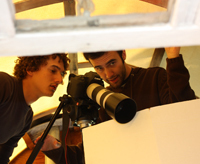 Making a movie, says Zubizarreta, is both nerve-racking and wonderful.

“That moment when you sit down to write a script—it’s exhilarating,” he says. “What’s really terrifying, though, is the night before filming when you realize you wrote about sheepherding and now have to do it.”

Ultimately, he says, “you have to be confident in yourself and what you did.” Part of Zubizarreta’s confidence arises from his training and experiences at Notre Dame.

“It’s been cathartic, all of my classes really coming together for this film and this moment,” he says of his senior thesis. “I can point to moments in the film and say ‘I remember learning to do that in this class with this professor.’ Notre Dame has given me so many practical tools and skills, so with this film I can take that next step from being a student who made a film to being a professional filmmaker.”

Zubizarreta knows it will take more than technical skills to succeed in his chosen career. “You need something else to inspire you, to inform you, to give you something to talk about,” he says. “Creativity is taking what you learn in philosophy or in writing a paper and putting it into a creative project. In that sense, the overall Notre Dame education is absolutely essential to any creative pursuit.”

A commitment to writing has also been a key to Zubizarreta’s success, from publishing scholarly criticism in the journal Film Matters to getting a short story accepted by Lost Piece, Notre Dame’s undergraduate journal of letters.

Zubizarreta’s senior thesis film debuts at the DeBartolo Performing Arts Center on May 6, and he hopes to arrange a premiere at Spain’s San Sebastian International Film Festival in September.

“My career goal is to, within five years, make my first full, feature-length film,” says Zubizarreta. Meanwhile, he is applying for a Fulbright Scholarship to study scriptwriting in the Basque region of Spain next fall and plans to spend the summer in Los Angeles.

“I’ll see the business, make contacts, get my feet wet,” he says. “Hopefully I won’t sink.”

Even a cursory glance at his accomplishments thus far is assurance that Zubizarreta stands on very solid ground.