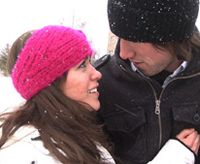 One weekend last month, members of the Notre Dame community sat down to watch 16 films, ranging from comedies to dramas and documentaries, in one evening. But these movies weren’t made in Hollywood.

That’s because the 23rd annual Student Film Festival in the DeBartolo Performing Arts Center’s Browning Cinema showcased the work of many students in the Department of Film, Television, and Theatre. The features were created in the various film production classes that took place during the fall 2011 semester.

“The Student Film Festival started as a small event in the basement of the Center for Continuing Education,” says Ted Mandell ’86, a professor in the Department of Film, Television, and Theatre, who is currently in his 24th year at Notre Dame. “I think 50 to 75 people showed up. Anything students made in our production courses that they wanted screened got into the show. Needless to say, it was a bit long.”

The Student Film Festival has grown significantly since then, moving from the Snite Museum of Art to the Hesburgh Auditorium to the current multi-night event in the Browning Cinema. The length of the event has also been curtailed to about 110 minutes of films each year.

The films screened at the festival are the students’ class projects. Whether the class is centered on scripted or documentary filmmaking, the students are given great freedom to pursue their ideas.

“The great thing about the production classes is that they really throw us into the film making process. After we submit our dialogues for the scenes, we are set free to go do it,” says Grace Carini, a sophomore.

This means that the students are responsible not only for the creative elements of the films, but also the technical aspects. The projects are meant to challenge the students, and they do.

“The biggest challenge in making these films were definitely the time constraints that were set and working to complete professional-looking films as a college student,” says Kelsie Kiley, a senior who worked on two films for the festival. “I have multiple jobs, as well as other classes and projects, and it’s challenging when you want to fully immerse yourself in your film projects.”

Even after the filmmaking process was over, the students still had to endure the nerve-wracking process of screening their films to an audience of over 1,000 viewers, including friends, professors, and complete strangers, over the three-night festival.

“I was so nervous about seeing my films on the big screen,” Kiley says. “It’s terrifying because no one around you really knows that you are the filmmaker. People will make comments, laugh, and scoff without knowing that the creator is in the row in front of them. I went to two screenings and my palms were sweaty and my stomach was in knots both times.”

Collin Erker, a junior, recognizes the luxury that Notre Dame film students have to create and screen their works.

“The most fun part of making the films was just taking every chance we could to be ambitious,” he says. “We only get to make so many films at school. I wanted to be sure to try to be better every time.”

The students who participated in this year’s film festival are in great company. Many successful Notre Dame College of Arts and Letters alumni got their start in the student film festival. Last year, two pieces received special attention. The first, The Elect by Erin Zacek ’11 and Dan Moore ’11, was an official selection of the 2011 Los Angeles Film Festival as well as the internationally prestigious Angelus Student Film Festival. The second, Picking Up America by Marie Wicht ’11 and Michael Burke ’11 was a selection of 10 national film festivals and featured on both NBC and ABC national news broadcasts.

Over the past 23 years, the Student Film Festival has become one of the most anticipated annual events on campus. Watching the pieces screened at the festival rewards the audience, but more than that, the experience of creating and screening their own films rewards the students.

“I would never have said this going into college, but I am going to enter the film or television industry after graduating. I was supposed to be a doctor,” Erker says. “I just can’t let go of my passion for film.”