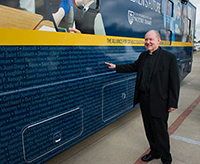 Rev. Timothy R. Scully, C.S.C., Hackett Family Director of the Institute for Educational Initiatives and professor of political science at the University of Notre Dame, will be awarded the $100,000 William E. Simon Prize for Lifetime Achievement in Social Entrepreneurship by the Manhattan Institute for founding and leading the Alliance for Catholic Education (ACE).

“On behalf of the entire University, I want to congratulate Father Scully for this recognition and for his leadership in supporting Catholic schools and the essential service they provide in delivering spiritually enriching, morally grounded, quality education to many of the nation’s poorest children,” said Notre Dame President Rev. John I. Jenkins, C.S.C.

Father Scully will receive the award during ceremonies Tuesday, November 5 in New York. The monetary prize will be given to the Congregation of Holy Cross to support its worldwide education mission.

ACE, founded by Father Scully in 1993, is a component of Notre Dame’s Institute for Educational Initiatives. The program trains hundreds of Catholic school teachers and leaders annually to serve predominantly under-resourced schools, provides an array of research-based professional services and builds broad networks of support for schools in more than 75 dioceses across the United States. ACE’s long-term goal is to help transform the Catholic school system to ensure every child has the chance to enjoy the lifelong benefits of attaining a high-quality education.

To mark ACE’s 20 years of service, Notre Dame has launched the Fighting for Our Children’s Future National Bus Tour, a cross-country effort to raise awareness of the profound impact that K-12 schools have on the future of the nation’s children and to celebrate the unique role that Catholic schools play as agents of human formation and social transformation.

Visiting nearly 50 cities during the 2013-14 academic year, the tour began earlier this month in Dallas and will continue through the Midwest and East Coast in the fall, and the South, Southwest and West Coast in the spring. The bus will be in New York when Father Scully receives the award.