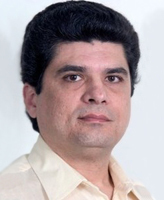 Orlando Ricardo Menes, director of the University of Notre Dame’s Creative Writing Program, recently was named winner of the 2012 Prairie Schooner Book Prize in Poetry for his manuscript, Fetish, which will be published by the University of Nebraska Press.

The winner of the 2011 Prairie Schooner Book Prize in Poetry was Susan Blackwell Ramsey, who received her M.F.A. in creative writing from Notre Dame in 2008.

Founded in 1927, Prairie Schooner is a national literary quarterly published with the support of the English Department at the University of Nebraska–Lincoln.

“Menes is an accomplished poet who has managed to evolve a language that seems determined to encapsulate the broadest and most compelling notion of America that embraces both the northern and southern continents,” Prairie Schooner editor Kwame Dawes says. “His poems reveal a formal dexterity that is awe inspiring, and his poems are rich with delight and full fascination with the human experience.

“His is a bold and inventive imagination. Our readers, we believe, will share our enthusiasm for Fetish.”

His History and Family

Menes says his new book both extends and recasts the themes of displacement and assimilation he began to explore in Furia, a previous collection published by Milkweed in 2005.

“Diaspora has defined my family in complex and contradictory ways for more than five generations,” he says, “beginning with our exile experience in Miami and my upbringing in Perú, then reaching back to ancestors who emigrated to Cuba in the 19th century.”

Menes has lived most of his life in the United States and since 2000 has been teaching in Notre Dame’s College of Arts and Letters, where he is an associate professor in the Department of English and a fellow in the Institute for Latino Studies—but his past is present in his upcoming volume of poetry.

“These are poems, whether in free verse or in traditional forms, that sew together stories of dislocation and loss, oppression and poverty, threadings of survival and hope, lives of work and faith seamed into a reverent wholeness I call the Américan tapestry, by which I mean all the Americas,” Menes says. “They immerse themselves in the cultures and histories of these varied places—including South Bend, Indiana, where I have found a sense of rootedness as a university professor and, more importantly, as a father.”

Menes notes that fatherhood is another essential element of Fetish, and one he explores primarily through sonnet form. Poems such as “Ars Poetica,” for example, focus on the craft of upholstery, Menes’s father’s primary occupation, which the author says has influenced his own poetics.

“Other sonnets, such as ‘Tantrums,’” Menes says, “delve into my own relationship as a father to my American-born son as well as to my adoptive daughter (born in Panamá), a beautiful, bright child who suffers from behavioral disorders. As her father but also as a poet, I sense an enduring obligation to tell her story.”

Yet other verses express the multicultural experience, be it Cubans struggling with poverty in “Courtyard of Clotheslines” or the mixing of Yoruban and Christian symbolism in the titular poem or the memories Menes recalls in “Television, a Patient Teacher” of watching Mr. Rogers’ Neighborhood and other 1960s shows to perfect his American English.

In addition to Fetish and Furia, Menes is author of Rumba atop the Stones (Peepal Tree), and his poems have appeared in magazines such as The Alaska Quarterly Review, Antioch Review, Callaloo, The Hudson Review, Image, Indiana Review, Shenandoah, and Ploughshares, as well as Prairie Schooner.

Besides his own poems, Menes has published translations of Spanish poetry, including My Heart Flooded with Water: Selected Poems by Alfonsina Storni (Latin American Literary Review Press).

He also serves as editor of Remain in Ecstasy: Latino Writings on the Sacred (Bilingual Press/Editorial Bilingüe) and The Open Light: Poets from Notre Dame, 1991-2008 (University of Notre Dame Press).

Menes’s honors include a Literature Fellowship from the National Endowment for the Arts in 2009 and an Illinois Arts Council Literary Award in 2001.

Of wining his most recent award, Menes says simply, “It is a privilege.”