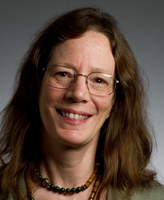 For her contributions to Emerson studies, Laura Dassow Walls, the University of Notre Dame’s William P. and Hazel B. White Professor of English, has been awarded the 2012 Ralph Waldo Emerson Society Distinguished Achievement Award.

“Scholarship can be very lonely work,” Walls says, “and when I started out, I wasn’t sure if my sense of the centrality of science to Emerson’s writing—writing that is at the heart of American literature—would be accepted; I went out on something of a limb.

“To have my research honored in this way is enormously encouraging. The more I work, the more the connections between the humanities and the sciences seem to multiply, and this award means that others feel I’ve made a real and lasting contribution. It makes me want all the more to build on what I’ve done, to take it further.”

So far, Walls’ scholarship on Emerson has included several essays and a book, Emerson’s Life in Science: The Culture of Truth, which details the integral role science played in Emerson’s thought and writing.

“I argue that when Emerson experienced his religious crisis, which impelled him to quit the ministry, science gave him the sense of order, wholeness, and purpose that enabled him to move to his new career,” she says. “He became a sort of secular minister, a founder of modern thought who explores the broader meaning of a scientific worldview for art, religion, and morality—what Emerson called ‘the conduct of life.’”

In addition to her focus on Emerson specifically, Walls studies 19th century American literature and transcendentalism, particularly where literature and science intersect.

Her most recent book, The Passage to Cosmos: Alexander von Humboldt and the Shaping of America, won the Modern Language Association’s James Russell Lowell Prize, the Organization of American Historians’ Merle Curti Award for the best book in American intellectual history, and the Michelle Kendrick Memorial Book Prize from the Society for Literature, Science, and the Arts.

The book, she says, is about how German scientist and traveler Alexander von Humboldt shaped the early-American intellectual and political landscape—including Emerson, who was one of Humboldt’s first American readers.

“Emerson was very cosmopolitan in his reading, thinking, and traveling,” she says, “and this got me interested in transnationalism, or in other words, the ways in which American literature arises as a response to world literature, including the sciences. I try to bring that larger perspective to bear on the authors I study.”

Currently, Walls is working on a biography of Henry David Thoreau. She says she hopes to correct the stereotypes and misconceptions about him, such as that he was a hermit and misanthrope.

“My first book was on Thoreau and science,” Walls says, “but I now see this as just one part of a much larger story of his life as a poet, philosopher, scientist, and reformer, and I want to tell that story. There is a real need for a new biography of Thoreau; we know a lot more about him than we did even 10 or 15 years ago. … It’s important, if we’re really to have a sustainable future, to realize we share an intellectual ancestor who shows that one needn’t hate humanity in order to love nature.”

In conjunction with her research, Walls will be teaching a yearlong honors seminar in the 2012–13 academic year for first-year students in the Glynn Family Honors Program, making sure to include in her curriculum more than one of Emerson’s works.

Even before Thoreau and her other academic work, Walls says, there was Emerson.

“When I was still quite young, I found a little volume of Emerson’s Essays in my father’s library,” she says. “It was bound in soft, green leather, and it was small enough to fit into a pocket. The look and feel of this old book intrigued me, and when I started to read it, I was just carried away by Emerson’s voice, so provocative and deep. I carried the book with me for a long time, and I still have it, in a place of honor above my desk.

“Reading Emerson led me to Thoreau, and Thoreau to the German scientist Alexander von Humboldt and beyond to dozens of other interrelated writers and philosophers. I’ve been fascinated by American transcendentalism ever since I first opened that little book.”

Emerson, she says, was her first love in literature—and led her to make a “pretty bold move for a teenage girl”: taking herself seriously as a writer and thinker as she developed her interest in academic scholarship.

“This award honors the deepest roots of my own work in literature and the history of ideas,” Walls says, “and it comes from a wonderful circle of dear friends and colleagues who have been my mentors for many years.”