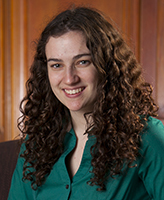 When senior Michelle Werner wrote an essay analyzing playwright Samuel Beckett’s Endgame, she did not imagine that the class assignment would later win her a prestigious departmental award.

“It felt a bit like winning the lottery without having bought a ticket,” she says. “I am incredibly grateful to the Department of English for selecting my essay.”

Werner was awarded the second annual Tom Brennan Prize for Excellence in Writing, which recognizes the best essay written for the Introduction to Literary Studies course.

The Madness of Endgame

Werner, who is majoring in English and marketing, wrote her essay in the form of a letter to a fictional Notre Dame drama team. It includes stage directions on how to portray Beckett’s tragicomedy, while offering an in-depth analysis of the Irish playwright’s 1957 work.

The panel of judges praised Werner’s essay, titled “The Madness of Endgame,” for its originality, critical acuity, and “rhetorical verve,” as well as its unorthodox approach.

“This essay stood out among a very fine collection of undergraduate essays,” noted one judge. “The author of the essay did excellent work mobilizing the critical history of Beckett’s play to serve an argument about how the unsteady movement between madness and modern self-enclosure throughout the text might be presented within clearly specified theatrical constraints.

“The author’s engagement with both performance history and literary criticism was elegant and led to crisp—and at times surprising—readings.”

The Value of Storytelling

Although Werner chose to major in marketing in her sophomore year, she says she “felt like something was missing” in her chosen path. She added English as a second major during her junior year.

“I’ve always loved English,” Werner says. “For me, it is both fun and a practical way to learn communication skills.”

In addition to her two majors, Werner is a scholar in the Glynn Family Honors Program. She has also found time to work as a student leader at the Center for Social Concerns, co-leading meetings and facilitating communication between dorms and outside service organizations.

Following graduation, she hopes to pursue a career in public relations—where she feels both her marketing and communication skills will be valuable assets.

“I love the idea of incorporating storytelling into marketing and connecting with an audience through the way that you present your brand,” she says.

The Strength of the Literary World

In her final semester at Notre Dame, Werner is completing a senior thesis project, examining the power of language and the role of gendered politics in dystopian novels.

For the project, she chose to focus on George Orwell’s 1984, Ray Bradbury’s Fahrenheit 451, and Margaret Atwood’s The Handmaid’s Tale, and says she has appreciated the opportunity to focus narrowly on a topic.

“I enjoy reading dystopian fiction because it pairs incredible imaginative powers with striking social commentary,” Werner says. “This thesis gave me the chance to examine the strength of the literary world in establishing gendered power dynamics.”

Werner also believes that dystopian novels can serve as inspiration when examining real-world issues. “In showing us the flaws in these fictional worlds,” she says, “these novels can point us to ways we can make our own world better.”

The Brennan Prize was established to honor the memory of Tom Brennan ’65, a Department of English alumnus who characterized himself as a rhetorician and served as a writer and editor for The Juggler during his time at Notre Dame. He began his career as an advertising consultant and eventually became a top marketing analyst and teacher of advertising courses. His friends and family remember him for his love of fiction, theatre, and the government, as well as for his ability to find the appropriate words for any situation.