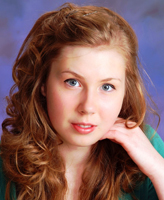 Ariel Clark-Semyck, a rising sophomore English major at the University of Notre Dame, will spend three weeks at Shakespeare’s Globe Theatre this June as part of the Fulbright Summer Institute program.

After a rigorous application and interview process, the U.S.-U.K. Fulbright Commission selects approximately 50 undergraduate students each year to participate in a variety of fully-funded summer exchange programs at leading institutions.

Clark-Semyck is one of three U.S. students invited to attend the American Institute for Foreign Study (AIFS) Summer Institute at Shakespeare’s Globe Theatre—a demanding academic and cultural immersion program that focuses on acting and the study of Shakespearean texts, including workshops on combat play, set design, movement, and dance.

Coursework will explore the historical and current value of Shakespeare’s plays through a practical examination of text and language, performance space, the materials of theatre practice, and the unique relationship between actors and audience at the Globe. Students will have access to the theatre’s library and archives for research, and will also get to see live performances and participate in question-and-answer sessions with the actors.

A native of Park Ridge, Ill., Clark-Semyck recently completed her First Year of Studies at Notre Dame, where she focused on English, psychology, and Italian classes in the College of Arts and Letters.

“I’m looking forward to studying Shakespeare with the master players of the Globe Theatre,” Clark-Semyck says, adding that it will be her first trip abroad.

“Upon learning that I received the award, I was ecstatic,” she says. “I hope this experience will enable me to bring the knowledge and understanding of acting that I gain at the AIFS Institute to Notre Dame’s Shakespeare programs on campus and in the South Bend community.”