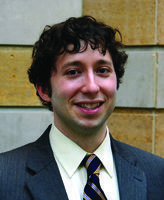 Amid the national discussion about how to jumpstart the U.S. economy, Notre Dame economist Kirk Doran is investigating how highly skilled foreign workers who move to the United States influence the country’s productivity, employment, wages, and technological advances.

Many policymakers are advocating steps to increase the pool of scientists and engineers, including recruiting them from overseas, he notes, but there is not much data available on how an influx of foreign talent actually affects the economy.

“Presumably, one of the benefits of more scientists and engineers is that we produce more applied science,” Doran says. “We’re looking at what happened to the American mathematicians who were already here—their productivity, their employment prospects and wages, and the number of patents produced.”

The study seeks to determine whether the arriving Soviet mathematicians actually generated new opportunities and economic growth in America or merely replaced their U.S. counterparts, resulting in negligible overall impact.

To do so, Doran and Borjas are asking specific questions such as: “Did the Soviet mathematicians make the Americans better when they interacted, or did some Americans give up because the Soviets were better? Did universities put more resources into faculty or was hiring and funding a zero-sum game during the influx? Do we owe any current technologies to this influx?”

“We want to help academics understand high-skill immigration better, but we also want to give policymakers the opportunity to base their decisions on facts, instead of popular wisdom or guesswork,” Doran says.

It’s too early to draw conclusions, but Doran expects the project will yield two or three papers. “We want to make general statements about this episode that we can apply to the future,” he says.

Doran, who is on leave at the National Bureau of Economic Research this academic year, is also engaged in research initiatives focusing on psychological aspects of economic behavior. One project, for example, examines thousands of trip sheets from New York City taxi drivers to explore how people balance increases in wages with the number of hours they work.

“Happiness is the key economic component,” Doran says. “Economic theory says we do the thing that improves our happiness the most. But people are not always rational. When they’re not, they can miss out on decisions that would improve their happiness, and policymakers can potentially change the rules of the game to make happy outcomes more likely.”