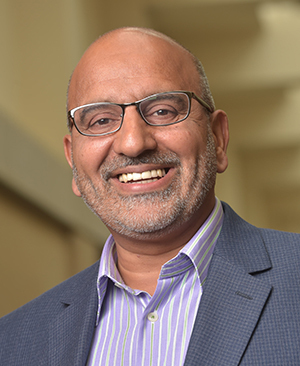 Ebrahim E.I. Moosa, a leading scholar of Islamic thought, philosophy and literature, has been appointed professor of Islamic studies at the University of Notre Dame’s Kroc Institute for International Peace Studies and in the Department of History.

Moosa will co-direct, with Scott Appleby, Contending Modernities, the global research and education initiative examining the interaction among Catholic, Muslim, and other religious and secular forces in the world. His appointment is made possible through a grant to Contending Modernities from Notre Dame’s Strategic Research Initiative.

“I am delighted to welcome Ebrahim Moosa, one of the nation’s most respected and influential authorities on global Islam, to Notre Dame’s world-class team of experts on religion in the contemporary world,” said Appleby.

“A creative and dynamic thinker, he will be a catalyst for innovative programs and stimulating debate on some of the most pressing issues facing believers dedicated to peace, justice, and the common good."

Moosa’s interests span both classical and modern Islamic thought with a special focus on Islamic law, history, ethics, and theology. He is the author of Ghazali and the Poetics of Imagination, winner of the American Academy of Religion’s Best First Book in the History of Religions (2006) and editor of the last manuscript of the late Professor Fazlur Rahman, Revival and Reform in Islam: A Study of Islamic Fundamentalism. In 2005 he was named a Carnegie Scholar to pursue research on Islamic seminaries of South Asia. His next book, What Is a Madrasa? is forthcoming from the University of North Carolina Press.

Born in South Africa, Moosa earned his M.A. and Ph.D. from the University of Cape Town. Prior to that he earned a degree in Islamic and Arabic studies from Darul Ulum Nadwatul `Ulama in Lucknow, India. He also has a B.A. from Kanpur University and a postgraduate diploma in journalism from the City University in London.