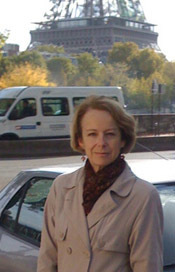 The editorial board of the European Romantic Review and the executive committee of the North American Society for the Study of Romanticism have chosen an article by Julia Douthwaite, professor of French in Notre Dame’s Department of Romance Languages and Literatures, as the winner of their Best Article of 2009 award.

“The Frankenstein of the French Revolution: Nogaret’s Automaton Tale of 1790,” written by Douthwaite with former graduate student Daniel Richter, was selected for the prize based on its merits in scholarship, originality, quality of writing, and significance for romantic era studies.

“A preeminent scholar in the field of French and francophone literature and culture, Julia Douthwaite is nationally and internationally recognized for her path-breaking discoveries in 18th- and 19th-century literary and cultural history,” Ted Cachey, department chair and professor of Italian, says. “Her commitment to graduate education and the quality of her mentoring are also well-illustrated by this prize-winning essay she co-authored with Daniel Richter.”

Mary Shelley first published Frankenstein, now a classic in the genre of horror stories and films, in 1818. Shelley claimed that she had gotten the idea for the Frankenstein story (the name of the scientist, not the monster) from a dream.

But Douthwaite’s research shows that approximately 28 years before Shelley’s book was in print the French author François-Félix Nogaret not only coined the name Frankenstein in the 1790 novella Le Miroir des événemens actuels, ou la Belle au plus offrant (The Looking Glass of Actuality, or Beauty to the Highest Bidder) but that he also used the name to designate a scientist-engineer hero who invents a life-size automaton, much like Mary Shelley’s hero.

The article by Douthwaite delineates the “surprising resemblance” between Nogaret’s and Shelley’s stories, similarities that exist in spite of the different historical and ideological contexts of the two works. The Frankenstein of 1790 and Other Missing Links from Revolutionary France, Douthwaite’s book in progress, will elaborate on the arguments put forward in her article, drawing connections between writers of the French Revolution and later writers such as Shelley, Dickens, and Stendhal.

“I am thrilled with this award, especially because it confirms my hunch that the ‘missing link’ concept at work here is convincing,” Douthwaite says.

ERR is a journal devoted to innovative scholarship on the literature and culture of Europe, Great Britain, and the Americas during the period of 1760-1840. The North American Society for the Study of Romanticism was established in 1991 as a forum for the discussion of a variety of theoretical approaches to romantic works of all genres and disciplines and of subjects relevant to the international and interdisciplinary study of romanticism.