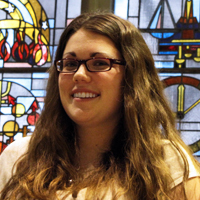 Colleen Anderson discovered her passion for research when she wrote a paper on the use of images during the civil rights movement.

The paper, which she began to fulfill a class requirement, grew into a polished historical analysis in the months after she submitted it to the Journal of Undergraduate Research, an annual publication by the College of Arts and Letters. The journal’s editorial staff—all of whom are fellow students—worked with her to sharpen her argument and writing style.

“The whole process helped me so much,” the Notre Dame senior says. “It gave me practice for my senior thesis, and it helped me make a better argument.”

Anderson, an art history and history double-major, credits the journal’s editing process with refining her civil rights research. In addition to advising her on argument and style, staffers suggested additional areas she might explore.

“The peer feedback that you don’t normally get was really helpful,” Anderson says, adding that she appreciated the opportunity to correspond with the journal’s editorial staff about her research.

Her paper analyzed images from Life, Newsweek, and Time in order to explore coverage of the 1963 protests against segregation in Birmingham, Ala., and the 1965 demonstrations on behalf of voting rights in Selma, Ala.

The three magazines she examined covered the 1963 protest differently: Time underplaying images of violence against protestors, Newsweek depicting more such images, and Life offering the most vivid photos. But by 1965, as public opinion shifted in response to media coverage of the civil rights movement, all three magazines covered the Selma demonstration sympathetically.

The journal uses a competitive process to select articles, forcing its staff to make difficult decisions, says Assistant Dean Vicki Toumayan, its faculty advisor. Each year, on average, it chooses only about 10 of the 70 articles submitted for use in print or online.

“In the discussions, the criticism starts to come out because they know what they want to see,” Toumayan says. “Is the argument well made? Is it consistent? Is the evidence good? Are there counter-arguments? They have to be able to articulate why they think it’s a good paper.”

The competitive process also helps students whose works don’t make the cut. “Even for students who just submit articles,” she says, “being aware of the process gives their work a different dimension because it’s making them aware that they’re communicating with a larger audience.”

For Anderson, Toumayan says, starting high-level research as an undergraduate has opened a range of opportunities: “I think it’s about becoming aware of research, interested in research—and excited by the opportunity to share your work with others.”