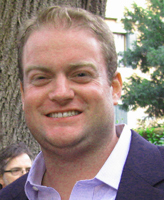 At this summer’s Venice Biennale—often called the Olympics of the contemporary art world—the U.S. pavilion features a musical ATM, a treadmill atop an upside-down World War II tank, and gymnasts performing routines on airline seats.

An industrial design major, Hunt ’01 specializes in managing large-scale art projects for cultural institutions such as the Indianapolis Museum of Art, his primary client since 2007 and commissioner of the U.S. pavilion.

“One of the thrills of working with artists,” Hunt says, “is that they come to the table with unprecedented concepts—some are way out there. The key is to understand why they’re trying to do what they want to do so that you can help them problem-solve in ways that maintain the integrity of the artwork. 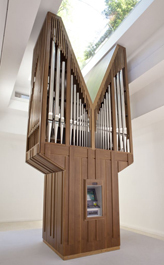 “I’m constantly bringing people from the world of engineering together with artists to determine what’s possible and what’s not, and to push the limits.”

Like many of Hunt’s projects, the Venice exhibit required him to assemble and manage an international team of experts from a wide range of disciplines, countries, and time zones, many of whom did not actually meet one another until the grand opening.

But from fabricating that musical ATM to delivering a 52-ton military tank through the pedestrian-geared streets of Venice, the Biennale project posed some unique obstacles, even for Hunt.

“We knew if we couldn’t find solutions there was no way to do the project,” he says. “If we had to compromise, we would cross the line, and it wouldn’t be worth including those pieces. For example, we had to identify a bank and ATM manufacturer who would partner with us. These traditional companies aren’t used to working in this artistic world. It’s real easy for them to say no, so it’s a big victory to get them come along for the ride.” 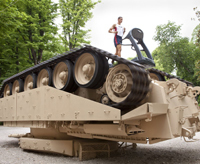 A big part of Hunt’s challenge as an art-project manager is facilitating communication between right- and left-brain people, he says.

“We have artists, curators, and educators on one side and structural engineers, traditional architects, metal shops, and contractors on the other. Helping them speak one another’s language and live in one another’s world is necessary to make these projects successful.”

That’s why the ability to communicate—as much as a formal education in design—is essential to his work, Hunt says.

“Every day, I use the writing and communication skills I learned through my liberal arts education in the College of Arts and Letters,” he says. “If I couldn’t write well and communicate with a diverse range of people, there’s no way I could do my job. Being able to bridge language and cultural barriers, the interpersonal skills that you learn going through Notre Dame, and that varied curriculum will pay off in the long term whether you realize it at the time or not.

“Specialized skills are great,” he adds, “but the ability to think creatively about complex, unusual problems is something that I don’t think you can learn on the fly. Those are also the things I look for in people I hire and want to work with.”

The Process of Inspiration

Hunt recently founded his own firm, DG Hunt & Associates, where he will continue to focus on project management for cultural institutions.

“I enjoy getting to know these spectacular people from these niche corners of the working world whom I never would come across if I wasn’t doing this type of work,” he says. “It’s a wide range of people who are brilliant in very different ways.”

And as the U.S. pavilion in Venice amazes, confounds, or inspires its visitors this year, Hunt has already achieved his desired reaction from a different audience.

“It is great to see the transition of people who thought we were crazy and then fell in love with it though the process,” he says. “At the beginning, they were extremely skeptical of our ambitious, over-the-top concept, but they came full circle and were excited and enthusiastic by the end.”

Photos of Allora and Calzadilla’s Algorithm (2011) and Track and Field (2011) by Andrew Bordwin.