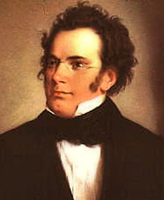 The University of Notre Dame’s Department of Music will celebrate Franz Schubert’s 215th birthday on Friday, February 3, with an afternoon of music by the famed Austrian composer.

The event, called Schubertiade, will take place from 12:30 to 5 p.m. in the O’Shaughnessy Great Hall and features performances from faculty and students, as well as readings chosen by J.W. Van Gorkom Professor of Music Susan Youens, an expert on Schubert’s work.

The Schubertiade is an open house, and audience members are welcome to come and go as they are able, says Stephen Lancaster, assistant teaching professor in the Department of Music.

“One of the purposes of the event,” Lancaster says, “is to bring music out of the concert hall and into the public thoroughfare to be enjoyed by passersby, as well as those who want to stop and take some moments to listen and hopefully be transported from the daily grind.”

The Department of Music offered a similar concert in January 2011 commemorating the 255th birthday of Wolfgang Amadeus Mozart.

“Schubert’s birth date, January 31, is near the same time as our Mozart Marathon of last year,” says Professor of Music Georgine Resick, “so we decided to vary the proceedings a bit and give our students the opportunity to branch out into different repertoire.”

Schubert composed more than 600 Lieder, or German art songs, and nine symphonies during his short lifetime. He died at the young age of 31 but had a wide posthumous impact, influencing the music of Franz Liszt, Robert Schumann, Johannes Brahms, and Felix Mendelssohn.

“Our Schubertiade repertoire will include two movements from the Rosamunde string quartet,” Resick says, “a movement from Schubert’s Arpeggione Sonata, the complete song cycle Die Winterreise, excerpts from piano sonatas, the entire song collection Schwanengesang presented by the Notre Dame Workshop, and performances of some of Schubert’s more than 600 songs, including choral arrangements presented by the University Chorale and the Glee Club.”

Cookies, coffee, and hot chocolate will also be served at the event, which is free and open to the public.

“People can expect to hear some of the most memorable art songs ever written, as well as beautiful instrumental music, in a relaxed and close environment,” Lancaster says.