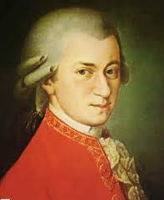 The University of Notre Dame will celebrate Wolfgang Amadeus Mozart’s 255th birthday on January 27, 2011, by performing his works in the O’Shaughnessy Great Hall from noon to 4 p.m.

“I thought, ‘Wouldn’t it be great if we could do a Mozart marathon?’” says Resick, who teaches voice and shares a birthday with the great composer. “There’s been a lot of enthusiasm for it. Mozart is a wonderful composer for young musicians to be working on so we knew there would be a number of students interested and ready.”

The event will feature a variety of musical performances by students, faculty, and other members of the Notre Dame community, interspersed with readings by and about the composer, including excerpts from Mozart’s prolific letters. Peter Jeffery, Michael P. Grace II Chair in Medieval Studies and co-director of the Master of Sacred Music program, hand-picked readings that relate to the specific works being performed.

The Department of Music will provide Viennese coffee and cookies, and visitors are welcome to bring their lunch with them. The Mozart marathon is an open house, and audience members are welcome to come and go as they are able, Resick says.

Shortly after noon, the department’s string faculty and students will perform the 25-minute serenade Eine kleine Nachtmusik. Other planned performances include church sonatas by the organ and string faculty, solo piano and harpsichord works by students and faculty, performances by the faculty vocal quartet, concert vocal ensembles performed by students, and excerpts from several Mozart operas.

“Up to this point, there were very few ensembles in operas, and mostly the music was a fairly static reaction to some dramatic impetus that had taken place before the music starts,” Resick says. “In this opera and in this particular finale, Mozart builds the drama symphonically. By the end of the finale, every character but two is onstage, and the finale lasts more than 20 minutes. For the time, it was unprecedented.”

Resick says Mozart’s works have stood the test of time for several reasons. “First of all, he was a consummate musician. Second, he took the musical language of the time and pushed it to its absolute limits,” she says. “Third, he had a terrific range. He could write utterly sublime music and then turn around in the next breath and write something irredeemably silly. And, fourth, he developed a completely new way of creating drama in music.”

This event is free and open to the public.