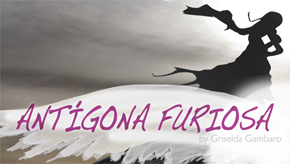 Antígona Furiosa (1986) is a re-shaping and re-telling of the Antigone story against the background of Argentina’s “Dirty War,” during which 9,000 to 30,000 people were interrogated and disappeared.

During an interview in 1998, Gambaro had this to say about her work: “I knew I was going to subvert Sophocles’ idea, in that I was going to speak with the voice of the Latin American woman and through the voices of so many women in my country who have done the exact same thing as Antigone, who disobeyed Creon’s order and threw a handful of dirt over her brother’s body, enough to uphold the tradition of an honorable burial for the dead. Antigone is every one of the Madres de Plaza de Mayo who have paid for their disobedience with their lives.”

Tickets can be purchased online at performingarts.nd.edu or by calling the ticket office at 574-631-2800. Admission is $15 for the general public; $12 for faculty, staff and seniors; and $7 for students.