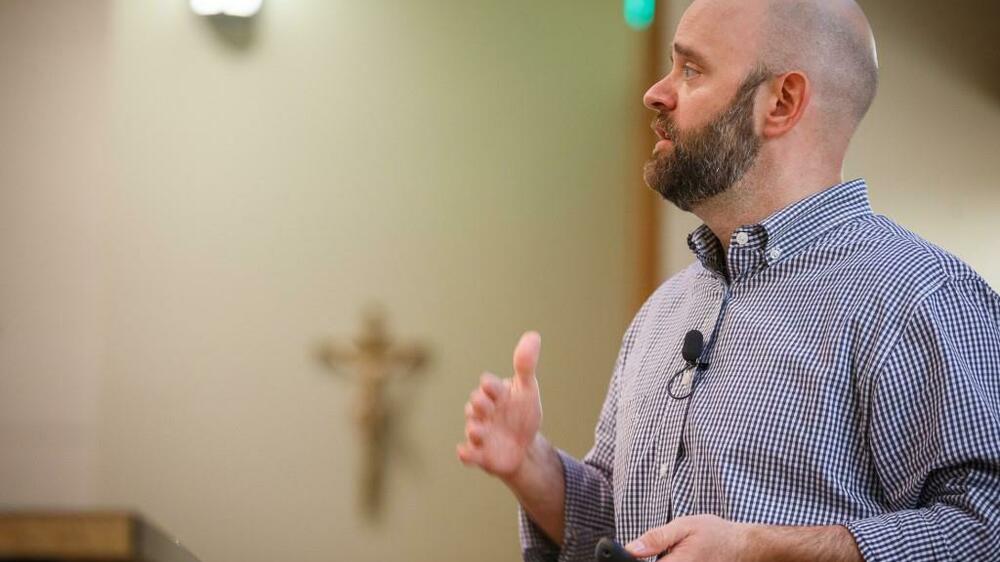 O. Carter Snead, professor of law at Notre Dame Law School and director of the de Nicola Center for Ethics and Culture, will receive the 2021 Expanded Reason Award in Research for his book “What It Means to Be Human: The Case for the Body in Public Bioethics” (Harvard University Press, 2020).

Now in its fifth year, the Expanded Reason Award is administered by the University Francisco de Vitoria, in conjunction with the Joseph Ratzinger-Benedict XVI Vatican Foundation, and recognizes excellence in efforts to “broaden the horizons of rationality, based on the dialogue of sciences and disciplines with philosophy and theology.” Four recipients of the Expanded Reason Award, three in the area of research and one in teaching, will share a 100,000 Euro prize and attend a special audience with Pope Francis to receive the award later this year.

“I am incredibly humbled and grateful to receive this award from the Expanded Reason Institute,” said Snead following the announcement. “'What It Means to Be Human’ aims to explore precisely those questions most fundamental to our human existence, and to broaden the public conversation around pressing issues in public bioethics today. It is an honor to receive this recognition for that work.”

“What It Means to Be Human” proposes a vision of human identity and flourishing that rejects the “expressive individualism” underlying much of American public policy today, arguing instead that the human person is an embodied, dependent being who relies on and participates in networks of care in order to thrive. The book, published by Harvard University Press in October 2020, was recognized by the Wall Street Journal as one of “The Ten Best Books of 2020”; in his review for the same paper, Yuval Levin called it “among the most important works of moral philosophy produced so far in this century.”

“'What It Means to Be Human’ explores difficult and vital questions at the intersection of law, public policy, biotechnology, philosophy and ethics — generating significant conversations within and beyond the academy,” said Sarah Mustillo, the I.A. O’Shaughnessy Dean and professor of sociology in the College of Arts and Letters. “This award demonstrates the impact of Professor Snead's interdisciplinary work in the college's de Nicola Center for Ethics and Culture."

“Professor Snead’s research sets him apart as one of the world’s leading experts in the field of public bioethics — the governance of biotechnology, medicine and the biosciences in the name of ethical goods,” added G. Marcus Cole, the Joseph A. Matson Dean and Professor of Law at Notre Dame Law School. “His contributions as a scholar and mentor to our students and the Law School community have been incalculable, and we are proud that the synthesis of his work in 'What It Means to Be Human’ has received this prestigious international recognition.”

More information about the Expanded Reason Institute may be found at its website.