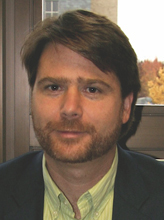 A high-profile roundtable in Washington, D.C., gave Kellogg Institute Faculty Fellow Daniel Brinks the opportunity to advise international financial institutions (IFIs) on how to improve their evaluations of the developing world’s legal systems.

Organized by the Center on Law and Globalization, the “Measuring Law: How to Do It Right in Real World Circumstances” roundtable on March 23, 2010, brought together senior legal staff of IFIs such as the International Monetary Fund and the World Bank and academic experts such as Brinks.

The roundtable challenged participants to think about ways in which the world’s major development banks could improve their evaluations of the way law actually works in the various countries they serve.

“It was a fascinating meeting,” said Brinks, who is an associate professor of political science and concurrent professor of law. “The representatives of the various banks explained the exigencies they faced in measuring law and legal institutions, how they carried out their evaluations, and what more they would like to do.

“I was able to draw on my prior research to suggest ways to avoid biasing the measures in favor of central, formal institutions, in order to develop a more complete picture of the elements that support the operation of a legal system. We had a free and far-ranging discussion on both the methods and the politics of legal measures.”

Brinks studies the role of the law and courts in guaranteeing democratic and constitutional rights, with a primary regional interest in Latin America. His most recent projects address the courts’ response to police violence, the judicial enforcement of social and economic rights, judicial independence, and the role of informal norms in the legal order.