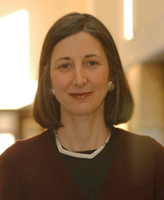 Karen Richman, a Notre Dame anthropologist who studies Haitian culture and popular religion, has been honored with the 2012 Award for OpenCourseWare Excellence. Her free, online Creole Language and Culture class was one of five winners in the text and still image category—selected from among the 17,000 courses shared by universities worldwide through the OpenCourseWare Consortium.

Richman directs the Center for Migration and Border Studies in the College of Arts and Letters’ Institute for Latino Studies and is a faculty fellow in Notre Dame’s Kellogg Institute for Latino Studies. She says she adapted her classroom curriculum for internet use in 2007 with the goal of building sustained commitment to the people of Haiti through an introductory study of the “vivid and sonorous” language of Creole. 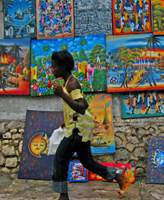 The course, she says, is designed not only to teach grammar and phonetics, but also to introduce students to the complexities of Haitian history, economy, politics, religion, and art. By placing language study within a broader anthropological framework, Richman aims to cultivate respect for Haitian thinking and values, “to teach a Creole perspective on the universe.”

“Creole is more than a tool—it actually shapes people’s perception of experience,” she says. “If you want to get to a deeper level of understanding and a deeper level of support or service, it is imperative to master Creole.”

After the 2010 earthquake in Haiti, the number of visits to the site spiked dramatically. Church volunteer groups, nonprofits dedicated to trauma recovery, journalists, and even the UN peacekeeping team in Haiti contacted Richman and accessed her course materials online.

Richman notes that Haiti has been plagued by one disaster after another, from the 2008 flooding in Gonaives to the cholera epidemic following the earthquake.

“Haitians are very familiar with poverty,” she says. “They have confronted tragedy and pain and struggle from time immemorial—as they would say, ‘from the time of Africa.’”

In her course, Richman teaches Haitian proverbs to provide insight into the ways Haitians cope with disaster and poverty—and perhaps with the foreign aid organizations that descend upon the country in bad times.

“I’ve seen a lot of well-meaning people not be able to accomplish anything,” she laments. “Haiti has received so much foreign aid, but often it doesn’t help the right people.”

Richman intends for her course to give students a new point of departure for future efforts by promoting understanding of Haitian realities. Whether students go on do relief and development work or undertake research in Haiti, “they’ll listen more and be able to interpret what they’re hearing,” she says.

Since 2004, Richman has taught Haitian Creole as part of the Notre Dame curriculum. The course (ROFR 20680) is cross-listed in the Department of Anthropology and the Kellogg Institute’s Latin American Studies Program.

An international collaboration of colleges, universities, and associated organizations, the OpenCourseWare Consortium offers a broad body of open educational content using a shared model. Notre Dame’s membership in the consortium began in 2006 as an initiative of the Kaneb Center for Teaching and Learning.