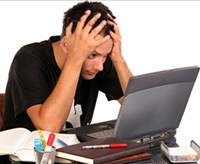 Most of us assume that confidence and certainty are preferred over uncertainty and bewilderment when it comes to learning complex information. But a new study led by Sidney D’Mello of the University of Notre Dame shows that confusion when learning can be beneficial if it is properly induced, effectively regulated, and ultimately resolved.

The study will be published in a forthcoming issue of the journal Learning and Instruction.

Notre Dame psychologist and computer scientist D’Mello, whose research areas include artificial intelligence, human-computer interaction, and the learning sciences, together with Art Graesser of the University of Memphis, collaborated on the study, which was funded by the National Science Foundation.

They found that by strategically inducing confusion in a learning session on difficult conceptual topics, people actually learned more effectively and were able to apply their knowledge to new problems.

In a series of experiments, subjects learned scientific reasoning concepts through interactions with computer-animated agents playing the roles of a tutor and a peer learner. The animated agents and the subject engaged in interactive conversations where they collaboratively discussed the merits of sample research studies that were flawed in one critical aspect. For example, one hypothetical case study touted the merits of a diet pill, but was flawed because it did not include an appropriate control group. Confusion was induced by manipulating the information the subjects received so that the animated agents sometimes disagreed with each other and expressed contradictory or incorrect information. The agents then asked subjects to decide which opinion had more scientific merit, thereby putting the subject in the hot spot of having to make a decision with incomplete and sometimes contradictory information.

In addition to the confusion and uncertainty triggered by the contradictions, subjects who were confused scored higher on a difficult post-test and could more successfully identify flaws in new case studies.

“We have been investigating links between emotions and learning for almost a decade, and find that confusion can be beneficial to learning if appropriately regulated because it can cause learners to process the material more deeply in order to resolve their confusion,” D’Mello says.

According to D’Mello, it is not advisable to intentionally confuse students who are struggling or induce confusion during high-stakes learning activities. Confusion interventions are best for higher-level learners who want to be challenged with difficult tasks, are willing to risk failure, and who manage negative emotions when they occur.

“It is also important that the students are productively instead of hopelessly confused,” he says. “By productive confusion, we mean that the source of the confusion is closely linked to the content of the learning session, the student attempts to resolve their confusion, and the learning environment provides help when the student struggles. Furthermore, any misleading information in the form of confusion-induction techniques should be corrected over the course of the learning session, as was done in the present experiments.”

According to D’Mello, the next step in this body of research is to apply these methods to some of the more traditional domains such as physics, where misconceptions are common.