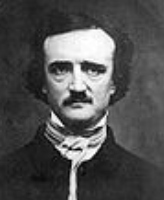 Throughout October, the South Bend/Notre Dame community will celebrate the works of 19th-century American author and master of the macabre Edgar Allan Poe with a full calendar of events designed to encourage community reading and discussion of his stories and poems.

Activities include a live radio drama based on Poe’s classic thriller “The Cask of Amontillado,” a nighttime tour of Notre Dame’s Cedar Grove Cemetery, a discussion of Poe’s mysterious poem “Annabel Lee,” screenings of Poe-influenced Hitchcock films, Vincent Price Poe-inspired classic horror films, a demonstration and artist-led project of gothic graphic art for teens, and a full month of weekly hair-raising radio drama on WSND-FM 88.9. Each event is designed to encourage the reading of Poe’s poetry and short stories and a re-thinking and re-imagining his works through film, art, theatre and history.

At the initiative of Clark Power, a professor in Notre Dame’s Program of Liberal Studies, Notre Dame’s College of Arts and Letters received a grant from The Big Read to organize the October events. The Big Read is a project of the National Endowment for the Arts (NEA), in partnership with the Institute of Museum and Library Services and in cooperation with Arts Midwest. It is designed to restore reading to the center of American culture by encouraging communities and campuses to read great books together. The program is a response to nationwide surveys demonstrating the troubling decline of reading for pleasure in all segments of the American population, particularly among adolescents.

It’s a natural fit for the Program of Liberal Studies, an academic program focusing on the study of major texts from the Western and Eastern traditions. The Program of Liberal Studies has a long tradition of community outreach grounded in Catholic social teaching and has already instituted faculty-led Great Books seminars at the South Bend Center for the Homeless and numerous local schools.

As part of The Big Read, students from the University’s Program of Liberal Studies and Department of Film, Television, and Theatre are working with local partners, including South Bend Civic Theatre instructors, to engage young readers in Poe’s gripping works. The Big Read funding enhances these outreach efforts by providing books, art materials, audio recordings, and movies to area classrooms and child-centered community agencies.

Other Notre Dame sponsors of The Big Read include the Institute for Scholarship in the Liberal Arts, the Office of Research, Hesburgh Libraries, WSND, the Alliance for Catholic Education, the Department of Film, Television, and Theatre, and the Snite Museum of Art. The local sponsors are St. Joseph County Public Library and the Center for History.