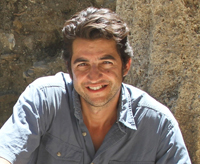 “I am honored and thrilled to receive this tremendous help for my research,” says Hernández, who is a faculty member in both the Department of Classics and the Department of Anthropology. This research support, he says, will enable him to publish the findings from a spectacular archeological site in Butrint, Albania, that he has studied since 2004.

The site, recognized by UNESCO as a World Heritage Site, has yielded archeological treasures and architectural insights from successive settlements, most notably Greek and Roman, which date from the 7th century B.C. to the 7th century A.D.

Hernández and his team have uncovered the architectural footprints of a Roman forum—a monumental town square built 2,000 years ago—and a 38-columned stoa thought to have served as a Greek civic center. Among hundreds of artifacts discovered at Butrint are a life-sized Roman statue, ceramic figurines—one of a female reveler of Bacchus, the other of a Greek goddess—and a wooden plough from the 4th century B.C.

Buried Beneath our Feet 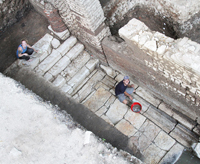 Forum pavement and the Roman Basilica discovered at Butrint, Albania.

“Archaeology is the science of human history,” Hernández says. “Buried beneath our feet throughout the entire world lie the physical traces of our ancestors—their lives, homes, cities, civilizations—the remnants of the struggles and achievements that gave birth to our modern world.”

The fellowship award from Harvard’s Loeb Classical Library Foundation is among the most prestigious in the field of Classical Archaeology.

All three grants underscore the importance and quality of Hernández’ work, according to Ken Garcia, associate director for the Institute for Scholarship in the Liberal Arts.

Garcia, who oversees grants awarded to faculty members in the College of Arts and Letters, notes that the competition for each of these fellowships is fierce. The ACLS, for example, received 1,121 fellowship applications nationwide and made only 65 awards—a success rate of only 5.8 percent.

Four of these ACLS awards went to Arts and Letters faculty, including Hernández. Also receiving ACLS fellowships for 2013-14 are:
• Katherine Brading, William J. and Dorothy K. O’Neill Collegiate Professor of Philosophy and director of Notre Dame’s History and Philosophy of Science graduate program, for “Theoretical Physics as a Contribution of Philosophy;”
• Catherine Cangany, assistant professor of history, for “An Empire of Fakes: Counterfeit Goods in Eighteenth-Century America;” and
• Xiaoshan Yang, associate professor in the Department of East Asian Languages and Cultures, for “Wang Anshi and the Song Poetic Sensibility.” 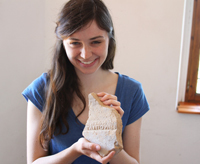 Notre Dame undergraduate Kaitlyn Farrell with a tile stamped in ancient Greek, one of the many finds from the Butrint excavation.

After he returns from the final excavation season in Butrint this summer, Hernández will use his fellowships to take an 18-month sabbatical during which he will focus full-time on a two-volume publication of the excavation findings, tentatively titled The Discovery and Excavation of the Roman Forum at Butrint: Urbanism in Ancient Epirus From the 7th Century B.C. to the 7th Century A.D.

The first volume, a monograph, will summarize and present the project’s major results and then contextualize them in terms of the Mediterranean and the Roman Empire. Hernández cites new evidence, for example, that Butrint was on par with Athens and Corfu, “in the use of marble for monumental architecture in the 6th century B.C.”

The book will also explore “the formation of the Butrint headland, the creation of the urban center there, and eventually its monumentalization during the Roman Empire and the breakdown of urbanism,” Hernández says.

In a second, edited volume, Hernández plans to examine the specialized analyses that have taken place at the site, including studies of its ancient glass, archaeobotany, archaeozoology, ceramics, sculpture, coins, and inscriptions.

Hernández has already made it a point to share his expertise with Arts and Letters student researchers during the summer excavation seasons in Butrint. By the end of the final trip this summer, he will have introduced more than two dozen undergraduate students (most from Notre Dame) and 16 graduate students to the site. 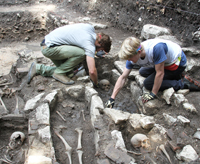 Not merely observers, the students actively engage in excavating and processing finds. “I consider the undergraduates as team members,” Hernández says.

Four Arts and Letters students returning to Albania this summer are Mattimore Cronin, Kaitlyn Farrell, Matthew Wieck and Suzanna Pratt. Wieck, a Classics major, is looking forward to his third season in the trenches, having now become one of the most experienced undergraduate students in archaeological field methods. 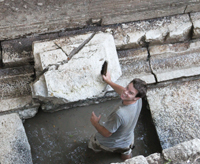 Pratt, a Seattle-area native with majors in anthropology and peace studies, worked as a finds manager in 2011 at Butrint. Drawing on that experience, she produced a senior thesis examining how cultural heritage is managed in Albania. With so many stakeholders, Hernández says, “Butrint is a perfect place for this type of research, and Suzanna has done very well creating a fascinating study.”

In any discussion of his work at Butrint, Hernández is quick to credit the many other scholars and researchers involved as well as the funding entities that have made the project possible.

The Albanian Institute of Archaeology’s Dhimiter Condi is a co-director of the project. Funding has come from Notre Dame, the American Philosophical Society, and the Butrint Foundation. At the University, key supporters include the Office of the Vice President for Research, the College of Arts and Letters, and the Department of Classics. The Institute for Scholarship in the Liberal Arts also helped underwrite Hernández’ research—and covered all student expenses including transportation.

The Genesis of Europe

The opportunity to examine the Butrint site, layer by layer, has been a privilege for him and his students, Hernández says, adding that the work also has significance to fellow scholars and archaeologists because it has allowed them “to look, as if though a window, through all those centuries.”