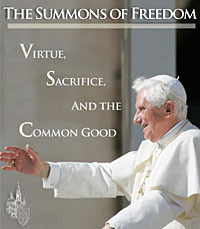 During his visit to the United States in April 2008, Pope Benedict XVI said that “the preservation of freedom calls for the cultivation of virtue, self-discipline, sacrifice for the common good, and a sense of responsibility towards the less fortunate. It also demands the courage to engage in civic life and to bring one’s deepest beliefs and values to reasoned public debate.”

Pope Benedict’s remarks have been chosen by the University of Notre Dame’s Center for Ethics and Culture as the theme for its 10th annual fall conference, “The Summons of Freedom: Virtue, Sacrifice, and the Common Good.”

The conference, to be held Nov. 12 to 14 (Thursday to Saturday) in McKenna Hall, will bring together scholars from Catholic, other Christian and secular institutions to discuss the state of the family from the perspectives of philosophy, theology and religious studies, law, history, the social sciences, literature and the arts.

“The theme of last year’s conference was ’Family: Searching for Fairest Love,’” said Elizabeth Kirk, associate director of the center. “As we planned our 2009 conference, we thought it important to expand the discussion of family life outward to include the social, political and spiritual common goods in which the common good of the family is nested. The Holy Father’s remarks make clear certain connections of utmost importance not only to us Americans, but also to anyone trying to sort through the enormous moral and political complexities of our dizzyingly globalized world. We decided to focus the conference on the virtues as those moral and intellectual habits that allow us to achieve, solidify and defend the network of common goods in which we human beings realize our happiness.”

The conference will feature two keynote lectures, both given in the McKenna Hall auditorium.

Rev. John J. Raphael, S.S.J., a 1989 Notre Dame alumnus and principal of St. Augustine High School in New Orleans, will give a lecture on “Building a Bridge over Troubled Waters: Inviting African Americans into the Pro-Life Movement” at 7:30 p.m. Nov. 12 (Thursday).

Thomas Hibbs, Distinguished Professor of Ethics & Culture and Dean of the Honors College at Baylor University, will speak on “Divorce as Fracture of the Common Good: Ingmar Bergman and Confession” at 7:30 p.m. Nov. 13 (Friday).

Originally published at newsinfo.nd.edu on November 09, 2009.