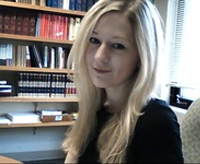 Candida Moss, assistant professor in the Department of Theology, is one of only 12 scholars in the world to receive the 2011 John Templeton Award for Theological Promise.

Awarded in collaboration with the Research Center of International and Interdisciplinary Theology at the University of Heidelberg in Germany, the John Templeton Foundation’s prize honors up-and-coming academics based on their doctoral dissertation or first post-doctoral book on the topic of God and spirituality.

Moss was recognized for her book The Other Christs: Imitating Jesus in Ancient Christian Ideologies of Martyrdom (Oxford University Press, 2010).

“When we think of the early Church, we think of Christians being persecuted and thrown to lions,” she says. “While there’s debate about how many Christians were actually executed, it’s clear that the majority of Christians thought martyrdom was a good thing. One important aspect of the theology of martyrdom was the idea that it was an imitatio Christi—a way of imitating or being like Jesus. … My research is about how early Christians expanded and developed this idea.”

Moss compiled Greek, Latin, Syriac, and Coptic accounts of martyrdom and looked at how martyrs were portrayed as “other Christs.” She says, “This literary presentation has much to tell us about why early Christians thought martyrdom was meaningful, what values and virtues they held particularly dear, and what it was about Jesus that they thought they should emulate.”

Moss first became interested in this subject in graduate school. “I realized that, for many, ancient Christian stories about martyrs were the primary way they learned about the significance of Jesus and Christianity in general. I wanted to examine these stories as resources for our understanding of ancient ideas about Jesus, salvation, heaven, and death. I chose to focus on the motif of the martyr imitating Jesus,” she says, “because it was so prevalent in ancient sources and remains a central component of Christian belief today.”

Next, Moss will be researching the appearance of resurrected bodies as understood by and represented in the early Church.

“I’m interested in the nitty-gritty of resurrection. For example, what does it look like? I will examine the intersection of ancient medicine, aesthetics, physiognomy, and philosophy in artistic depictions and theological discussions about the shape and features of resurrected bodies.”

At Notre Dame, Moss has taught classes in both the Department of Theology and in the Program of Liberal Studies. She says her teaching philosophy centers on helping students reexamine history and develop their own interpretation for past events.

“Notre Dame students can handle complexity and uncertainty, and I like to introduce and talk through problems and new ideas and theories with them,” she says. “It’s good for them to see that historical questions haven’t been settled and that they can learn to judge the arguments and evidence for themselves.”

That’s what Moss herself is doing in Cultures of Death, a book she is finishing up for Yale University Press. “It is a new history of martyrdom in the early Church—where the idea of martyrdom came from, why people decided to be martyrs, and how it was that martyrdom became so important for early Christians.”

The presentation ceremony for the John Templeton Award for Theological Promise will take place in Germany in May 2011.