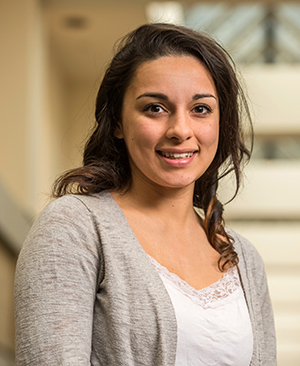 Notre Dame senior Brenna Gautam has been selected to receive the 2015 Yarrow Award from the Kroc Institute for International Peace Studies. The Yarrow Award is given annually to a peace studies undergraduate student who demonstrates academic excellence and commitment to service in peace and justice.

Gautam, a history and peace studies major from Clarksville, Tenn., will accept her award at the Kroc Institute’s undergraduate recognition ceremony on May 15.

As a student, Gautam conducted research for the Bureau of International Security and Arms Control in the U.S. State Department and the Center for Arms Control and Non-Proliferation in Washington, D.C. She also interned for Democracy for Development, a Kosovo-based think tank, where she conducted research in Kosovo and Serbia that focused on Kosovar political parties as well as the relationship between customs laws and security in various countries.

At Notre Dame, Gautam founded a Notre Dame student chapter of Global Zero, an international movement for the elimination of nuclear weapons, led student participation in nationwide nuclear disarmament campaigns, and presented a conference paper on grassroots organizing and nuclear disarmament in Istanbul, Turkey. She also has conducted research on violence against aid workers and is co-coordinator of the 2015 Student Peace Conference.

“Brenna has excelled in her coursework and research,” said Ernesto Verdeja, associate professor of political science and peace studies and director of undergraduate studies at the Kroc Institute. “She has successfully combined her research interests with important advocacy work on campus and beyond.”

“Peace studies strongly influenced my choice to pursue a legal advising career that focuses on emerging weapons technologies and disarmament,” Gautam said. “My coursework, independent research, and interaction with faculty have taught me to view seemingly intractable conflicts, such as the continued presence of nuclear weapons, as transformable.”