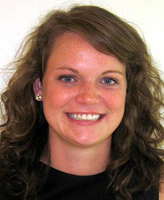 Economics majors in the University of Notre Dame’s College of Arts and Letters develop the analytical skills and social perspective needed to better understand complex economic forces at work in the world. They also hone the ability to express their ideas and insights both clearly and concisely.

That’s exactly what Class of 2011 students Elizabeth Koerbel and Matthew Conti demonstrated in their senior theses, which won first and second place, respectively, in the University’s annual Bernoulli Awards competition.

“I researched the connection between the Shanghai and Hong Kong economies, specifically how growth in one has benefited or harmed growth in the other,” says Koerbel, who majored in economics and Chinese. “I studied in Shanghai the spring semester of my junior year, and the incredible levels of growth and development I saw in these cities amazed me.

“This project was a great way to apply my economic knowledge to an empirical case—and I feel this experience solidified my undergraduate education.”

The Bernoulli Awards recognize exceptional research papers that use statistical methods to analyze an original and relevant intellectual question. Winning entries must also meet the standard for submission to peer-reviewed research journals.

Founded in 2008, the competition is sponsored by an anonymous alumnus who says his statistical research experiences as a student in the College of Arts and Letters landed him a job immediately after graduation—despite an economic recession—and continue to be valuable in running his own financial management firm.

Last year’s winners say the experience opened professional doors for them as well.

“It definitely helped me to be a competitive candidate in applying for jobs,” says Koerbel, who now puts her analytical skills to work for Boston Consulting Group.

Conti, who focused his thesis on the economic impact of diabetes management programs for Medicaid patients, parlayed his research experience into a job at ZS Associates, a global marketing firm that works mainly with pharmaceutical and medical product services.

“The economics background has been extremely valuable in my work at the consulting firm and will benefit me no matter what I choose to do next,” Conti says. “Economics provides students with the skills to logically and methodically confront and develop solutions to difficult questions. It also makes me more able to contribute to discussions and think critically about the challenges that confront people each day.”

Koerbel says her interest in the Department of Economics was first sparked in a University seminar she took as a first-year student. “It was a class called Capitalism and Democracy, which was essentially a sociological perspective on different political and economic systems,” she recalls. A microeconomics course she took that same semester solidified her choice of major.

“I liked that economics had stronger math and theory components than majors in the business program and also had the ability to explain trends and behaviors of society using statistical analysis,” Koerbel explains.

For her winning paper, she used those analytical skills to help understand the economic trends she had witnessed in Hong Kong and Shanghai. “The growth in both cities is astounding,” Koerbel says. “There is also a stark difference between the cities, however, in terms of standard of living. After experiencing this first hand, I became interested in what was driving this growth.”

Working with her faculty advisor, Assistant Professor Eric Sims, she developed a plan to test for connections between growth drivers in the two economies.

“From the perspective of a professor,” Sims says, “the best qualities in a student advisee are creativeness, drive, and the ability to think independently. Libby has all of these qualities in abundance. She identified an interesting question, developed a hypothesis, and tested that hypothesis largely on her own. This requires a good deal of intellectual maturity. I mainly helped with some of the details of implementation, but the core of the project was all hers.”

While the process was, at times, grueling, Koerbel says she is thankful for the experience and for the recognition she received. “I was obviously very interested in my thesis topic, so it was great to know that the Bernoulli committee also found the paper interesting and well researched.” 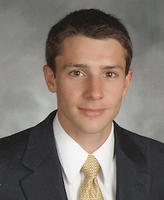 Conti says he was likewise honored to receive a Bernoulli Award, which he calls a meaningful recognition of the time he dedicated to developing, researching, and writing his senior thesis.

“The most rewarding part of the experience,” he says, “was the opportunity to graduate from Notre Dame with a completed scholarly work in which I was involved from the very beginning.”

Conti, who majored in economics and pre-professional studies, spent his junior year abroad at Oxford University studying the healthcare systems of both developed and developing nations. He also did two summer internships, one at Eli Lilly and one at Allegheny General Hospital in Pittsburgh. These experiences, Conti says, intensified his interest in issues at the intersection of medicine and public policy.

Back at Notre Dame, he worked with Keough-Hesburgh Professor of Economics William Evans to select a thesis topic that would allow him to contribute to the debate about healthcare costs. Specifically, his project examined cost-controlling aspects of Medicaid’s diabetes management programs.

“With rising and unsustainable healthcare costs being an important policy topic,” Conti says, “researching the most efficient way to distribute the limited resources we can dedicate to medical care will have significant consequences for the future of medicine in the United States.”

As for his future plans, Conti says he will continue combining economics and medicine through healthcare consulting and policy work. “I am learning a great deal from my present job at ZS Associates, and I know I will be able to apply these experiences to whatever I choose to do.”