Each year, approximately 30 percent of seniors in the College of Arts and Letters complete a yearlong thesis project, working one-on-one with a faculty member or graduate student to make an intellectual contribution to their chosen field of study.

The topic can be tailored to the student’s individual interest and may be done in the form of a paper, narrative nonfiction essay, creative writing project, journalistic article, documentary film, or museum exhibition.

The senior thesis project is the perfect opportunity for students to showcase the research, analysis, writing, and presentation skills they have developed as undergraduates.

Below is a sampling of the more than 200 Arts and Letters students who took on the challenge of a senior thesis this year. Along with their advisers, all senior thesis students will be honored at a special reception in the Great Hall of O’Shaughnessy at 3:30 p.m. this Friday, April 5. 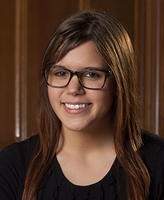 Anthropology major Morgan Iddings titled her senior thesis “Mind Games: The Role of Nostalgia in the Formation of Collective Memory in Post-Socialist Bulgaria.” Her faculty adviser is Rahul Oka, Ford Family Assistant Professor in the Department of Anthropology.

“Individual perceptions of the socialist past and the emerging democratic present in Bulgaria are far from resilient; they hinge on society’s collective ability to remember and forget,” she explains. “In this research, I interviewed individuals of varying socioeconomic status in Bulgaria and analyzed their perceptions of the past relative to the formation of collective memory. Bulgaria is a nation with a complex sociopolitical history, and this enigmatic past confounds the individual’s perception of both past and present.”

Iddings says her senior thesis experience has helped prepare her for the Ph.D. program she plans to start in the fall. “It has challenged me to think in a more critical way.” 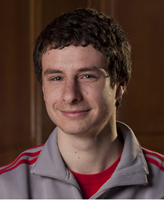 Joseph Massad, a political science and Arabic major, focused his research on “Islamic Political Parties and Democratization: Tunisia and Lebanon.” To develop his research project, Massad worked closely with Faisal Baluch, a Ph.D. student in the Department of Political Science.

“My thesis analyzes the contribution of Hezbollah and Ennahda to democratization, in Lebanon and Tunisia respectively, to understand the new model of Islamic political parties,” he says. “I have always wanted to write about Islam and democracy, and this thesis addresses concrete ways that Islam influences the emerging democracies in the Middle East. After the Arab Spring, the prevalence—and importance—of Islamic parties has skyrocketed.”

Indeed, Massad says the Arab Spring of 2012 was what prompted him to choose this particular research topic. “I’m looking at Islamic political parties and how they contribute to the democratization process. I want to see if they can be trusted to promote democracy in their countries.” 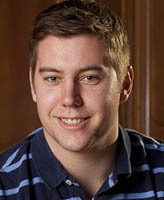 Political science and German major Andrew McDonough’s senior thesis is titled “The Effect of the Great Recession on Public Opinion in Respect to the European Union.” His faculty adviser for the project is Andrew Gould, an associate professor in the Department of Political Science.

“Looking at the current recession in Europe, I examine whether economic factors have increased in importance in determining an individual’s support for the European Union,” McDonough says. “This topic allowed me to combine my political science and German majors. I have also been able to combine study-abroad experience in Berlin, Germany, with my senior thesis, as I traveled back to Berlin over Christmas break to conduct interviews.”

His senior thesis, he says, has been a rewarding experience. “You’re putting all the tools that you’ve learned in the previous three and a half years to use and studying something far more in depth than you have at any point in your career.” 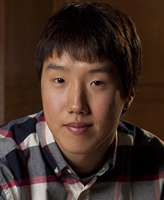 Seung Yoon Nam majors in Chinese in the College of Arts and Letters, with a double major in finance in the Mendoza College of Business. He worked with faculty adviser Xiaoshan Yang, an associate professor in the Department of East Asian Languages and Literatures, on “Microfinance and Financial Inclusion of Rural China, South Korea, and the United States.”

“My senior thesis is a comparative study of microfinance in rural China, South Korea, and the United States,” Nan explains. “I assessed the degree of development microfinance has reached in each country. Then by relating how the different macro-environmental factors shaped development of microfinance differently, I conducted an impact analysis of each factor. By choosing a topic that requires knowledge in both of my disciplines, I expanded my knowledge of microfinance while learning more about the Chinese financial system.”

Nam says his project allowed him to draw on his background as a South Korean native who has studied, lived, and worked in South Korea, China, and the United States. “I thought I’d bring my different perspectives together,” he says.

“It requires a lot of work to research in three different languages, but it’s rewarding.” 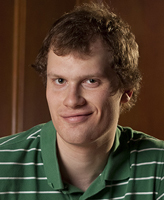 Zachary Smith is a double major in the departments of Africana Studies and Film, Television, and Theatre, with a concentration on film. His faculty adviser for his senior thesis on “The Horror Cinemas of Iran, Egypt, and Turkey” is Donald Crafton, the Joseph and Elizabeth Robbie Professor of Film, Television, and Theatre and interim director of the Nanovic Institute for European Studies.

“Horror is a truly international genre,” Smith says, “but American film scholars know almost nothing about the horror films of the Middle East. Bringing this work to light helps us understand the cultures, values, and fears not only of Iran, Egypt, and Turkey but also of the United States. Interested in the genre and in cultural differences around the world, I began to research horror as global cinema. I decided to be the first in the West to study the horror films of Iran. Eventually, I expanded my analysis to include the nations of Egypt and Turkey.”

One major benefit of doing a senior thesis is the freedom students have to choose and shape their own projects, Smith says. “It’s very self-directed and guaranteed to be something you’re excited about.”