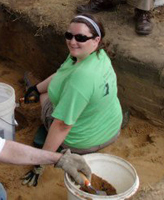 Anthropology majors at the University of Notre Dame took their studies from the theoretical to the practical last summer, completing internships that had them doing archaeological fieldwork in Mongolia, cataloging artifacts in Chicago’s Field Museum, and collecting the oral histories of Irish immigrants on Beaver Island, Mich.

Through these internships, students did more than gain experience in the field; they also had invaluable opportunities to work alongside experts and get insider looks at a variety of careers paths.

“I learned that museums are really more dynamic than you think they are,” says Caitlin Monesmith, a senior anthropology major who interned in the Field Museum’s African archaeology lab during summer 2011.

“You have so much to consider when thinking about what to put in an exhibit, how to preserve something, and how to catalogue something. Is it just a piece of bone with tool marks on it, or can you give it a broader context? Can you make these cultural ties?” 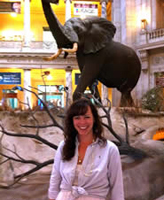 Senior Ellen Kozelka, who interned at the Smithsonian Institution National Museum of Natural History, says the opportunity—which included a research trip to Mongolia—“had a profound impact on my scholarly development and reaffirmed my desire to attend graduate school in anthropology.”

During her internship, Kozelka worked closely with J. Daniel Rogers, curator in the Smithsonian’s Department of Anthropology, on a project investigating the early history and archaeology of Mongolia and the relative importance of agriculture in different regions of the country.

“I learned how archaeologists conduct both museum-based research and archaeological fieldwork,” she says.

“Furthermore, by helping Dr. Rogers edit and submit a journal article for publication, I learned how fieldwork is translated into scholarship.”

Lesotho to Berlin, California to Washington

While Monesmith and Kozelka’s museum internships were annual opportunities sponsored by the Department of Anthropology, students are not limited to just those choices.

Sophomore Morgan Benson, for example, traveled to Lesotho to work for the Touching Tiny Lives Foundation. There, she helped take care of infants and toddlers who are malnourished or affected by diseases such as HIV or tuberculosis and assisted with outreach programs in neighboring communities.

Senior Kasia Ahern interned with the Beaver Island Historical Society in Michigan, working on its oral history collection. The experience ties into her ongoing work with Notre Dame anthropologist Deb Rotman’s Beaver Island Project, which investigates the experiences of Irish immigrants who did not settle in large urban centers on the East Coast.

Monesmith says her internship gave her a rare glimpse behind the scenes, where the vast majority of a museum’s artifacts are stored. “I had no idea how little of the museum’s collection is put on display,” she says. “It was really cool getting to work with collections hands on.”

The summer was her chance to work for African Anthropology Curator Chap Kusimba, a professor at University of Illinois at Chicago, where Monesmith has since applied to graduate school.

“Dr. Kusimba is hopefully going to be my adviser, if all goes well,” she says. “I plan on doing my grad school work based on the African materials I encountered in the Field Museum. I really gained an appreciation for East African archaeology, and obviously, getting to work with the man who might be my graduate adviser had a pretty big impact on me.”

Kozelka says her internship had a significant impact on her undergraduate studies as well as her post-graduation plans.

“The chance to learn from such knowledgeable and encouraging scholars was truly a once-in-a-lifetime opportunity—and I intend to show my gratitude by composing a senior thesis and eventually attending graduate school.”