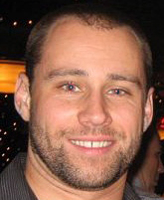 Biological anthropologist Lee Gettler ’05 made national news last year with his research on the linkage between fatherhood and testosterone, reporting that the hormone decreases in men once they have children and drops even more in dads who are very active in caring for their children.

Currently completing his Ph.D. at Northwestern University, Gettler will bring his attention-getting work to Notre Dame’s College of Arts and Letters this fall as an assistant research professor in the Department of Anthropology.

His work “promises to enliven the fields of biological anthropology, human reproductive ecology, and fatherhood,” says Susan Blum, professor and chair of the department.

“He is at the forefront of a new way of understanding the connection between human biology and behavior. It is a special treat to have him, and we are honored by his decision to join our department.”

Gettler has tracked men’s hormone levels over many years as they transition to parenthood and is examining how their hormones respond minute-to-minute as they interact with their children.

“Prolactin is generally seen as a ‘pro-nurturing’ hormone, and human fathers having higher levels than non-fathers is consistent with what we see in other species,” Gettler says. “However, when I looked at fathers’ hormones minute-to-minute when they were playing with their children, I found no changes in their testosterone and significant decreases in their prolactin. That was unexpected in the sense that I hypothesized testosterone would decline and prolactin would increase in the short-term.

“Trying to unpack the discrepancies between those sets of studies is something that I consider a provocative and exciting challenge as I begin my career at Notre Dame.”

Gettler also plans to begin a new project at Notre Dame that aims to understand how non-parental caregivers respond physiologically to childcare.

“My colleagues and I have made some very interesting discoveries regarding the changes in biological fathers’ hormones, but it is still fairly unclear whether these physiological capacities and patterns are specific to men acting as fathers or whether they would apply to other contexts,” Gettler says.

“If there is one fundamental fact about humans, it is that we are highly flexible and adaptable—and would have necessarily been so throughout our evolution—so it would not surprise me if these patterns of hormonal change extended to circumstances beyond biological parenthood.”

The Evolution of Human Cooperation

Gettler says his research drew inspiration from the studies of Peter Gray and other scholars who conducted groundbreaking work in this area before he became a graduate student.

As for the extensive news coverage that his Ph.D. research attracted, Gettler says he was rather surprised.

“We had anticipated that there would be some media attention for the study, simply because it touches on issues that resonate with the general public,” he says. “However, it would be disingenuous of me to suggest that we expected the deluge of media attention from around the world that followed the publication of our study.”

The study was featured in a number of major media outlets, including The New York Times, USA Today, MSNBC, and NPR. It also made TIME magazine’s “Top 10 New Findings in Parenting for 2011.”

“It was such an honor to have so many journalists as well as the general public interested in our work,” Gettler says. “Anthropology has so much to offer in terms of insights into everyday life and human diversity, past and present.”

Gettler first became interested in anthropology as an undergraduate at Notre Dame, and he took multiple courses on biological anthropology, where his readings focused on the cross-species literature related to paternal physiology.

“Professors Meredith Chesson and Agustín Fuentes are largely responsible for me becoming an anthropology major,” he says. “I took multiple classes from them, all of which stirred my passion for anthropology. They have continued to offer their advice, support, and friendship, for which I am incredibly grateful.”

Gettler says he’s also indebted to Professor James McKenna, who gave him a job in his laboratory after graduation. “He has proven a valuable friend and colleague. Without that year I spent at Notre Dame working in Jim’s lab and having many, many members of the department provide me encouragement, I likely would not be pursuing my Ph.D. at this time.”

After being away the last five years, he says, the high quality of scholarship and remarkable people in Notre Dame’s Anthropology department is only affirmed.

“The faculty embrace the ‘four-field’ approach, placing a heavy emphasis on respecting diverse ways of practicing anthropological scholarship. Theoretically, anthropology is supposed to be a wide-reaching, holistic discipline that draws on many, variable lines of evidence to explore human cultural and biological diversity in a broad scope,” Gettler says.

“Notre Dame’s department actually practices this approach, and I feel lucky to have an opportunity to join the faculty.”